KABUL - During a United Nations-backed global campaign to vaccinate children this week, Afghan Government officials are aiming to administer anti-measles and anti-polio vaccines along with additional doses of Vitamin A to about eight million children below five across the country.

Globally, the World Vaccination Week is marked between 24 and 30 April with the theme ‘Stop Measles Now’ this year. In Afghanistan, a national anti-polio vaccination campaign was launched on 21 April with thousands of health workers and volunteers fanning out across the country’s 34 provinces in the first three days to administer anti-polio drops to children below five, according to the UN World Health Organization (WHO), which supports government efforts to eradicate polio and measles.

The anti-polio campaign is significantly important in Afghanistan because, as the WHO said, 160,000 to 180,000 Afghan children below five missed their routine vaccination, including for measles, in 2012.

One of the priorities of WHO and the UN Children’s Fund (UNICEF) in Afghanistan is to eradicate polio – a challenge given that many Afghans see vaccination as a taboo, leaving the country as one of only three countries in the world, along with Pakistan and Nigeria, where polio is endemic.

Afghan Minister for Public Health, Dr. Suraya Dalil, said last week that two new cases of polio have been reported in Afghanistan this year – one each in eastern Nangarhar and Kunar provinces. The number was 36 last year. 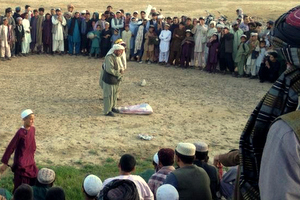 Dr. Dalil said that during the three-day campaign – focused on anti-polio vaccination – aimed to vaccinate around eight million children under five, which constitute about 90 per cent of Afghan children of that age group. Besides anti-polio drops, the children are also given Vitamin A capsules, which are necessary for children’s normal health and growth.

“Around 57,000 health workers and volunteers are taking part in the national drive throughout the country,” said Ms. Dalil, adding that the three-day anti-polio campaign would cost about US$3 million.

According to WHO, the global Vaccination Week is focusing on measles elimination in Eastern Mediterranean Region because all the countries of the region have set 2015 as the target for measles elimination. The Week highlights the importance of protecting individuals from vaccine-preventable diseases and celebrates the achievements of immunization programmes in promoting health communities.

In Afghanistan, the immunization coverage has ways to reach the goal of at least 80 per cent coverage in every district and 90 per cent nationally.

“It is for more people and their communities to be protected from vaccine-preventable diseases,” said Dr. Ahmed F. Shadoul, the Representative of World Health Organization (WHO) in Afghanistan. “We all must work together to convince people that immunization saves lives of their lovely children, mobilize action to increase vaccination coverage and reinforce support for achieving national, regional and global immunization goals.”

Meanwhile, Afghanistan is also celebrating on 30 April the World Malaria Day, which is marked globally on 25 April, with this year’s global theme ‘Invest in the Future. Defeat Malaria.’

Secretary-General Ban Ki-moon, in his message on the World Malaria Day, urged the global health community, including political leaders in endemic countries, to maintain their commitment to provide universal access to malaria interventions and end needless suffering from this preventable and treatable disease.

Since 2000, malaria mortality rates have fallen by more than 25 per cent globally. However, 50 of the 99 countries with ongoing transmission are now on track to meet the 2015 World Health Assembly target of reducing incidence rates by more than 75 per cent. Malaria still kills an estimated 660,000 people worldwide, mainly children under five years of age in sub-Saharan Africa. Every year, more than 200 million cases occur; most of these cases are never tested or registered.