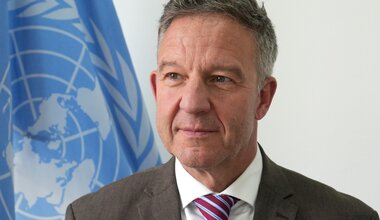 Mr. Potzel has held several senior positions with the German Ministry of Foreign Affairs, including as German Special Representative for Afghanistan and Pakistan (2017-2021), Commissioner for Crisis Management (since 2016), Ambassador of Germany to Afghanistan (2014-2016) and Head of the German Federal Foreign Office Middle East Division (2010-2014).  He also served as Personal Assistant to the Foreign Affairs Minister (2006-2009), in the Parliamentary and Cabinet Division of the German Ministry of Foreign Affairs (2004-2005), as Head of the Economics and Trade Section in the German Embassy in Tehran (2000-2004) and as Head of the Cultural Section in the German Embassy in Singapore (1997-2000).

In 2010, he was a visiting Fellow at the German Institute for International and Security Affairs studying the relations between Iran and Afghanistan.

Mr. Potzel holds a master’s degree in Persian and English language and literature studies from the Humboldt University Berlin in Germany and the University of Dushanbe in Tajikistan.  He is fluent in German, English, Persian and Dari. 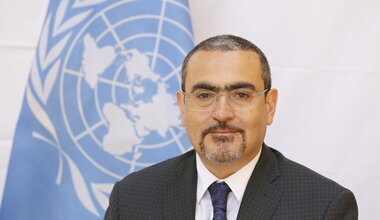 Ramiz Alakbarov was appointed in December 2020 as the Secretary-General’s Deputy Special Representative for Afghanistan with UNAMA, serving also as the United Nations Resident and Humanitarian Coordinator.

Mr. Alakbarov brings 25 years of experience in executive leadership, strategic planning and policy making, development programming and management, and humanitarian response, including as the Director of the Policy and Strategy Division in New York and the Country Representative in Haiti for the United Nations Population Fund (UNFPA).  From February to July 2020, he was Deputy Executive Director for Management and Assistant Secretary-General, ad interim, for UNFPA.  Since August 2020 he was the United Nations Resident Coordinator in Afghanistan, ad interim.

Mr. Alakbarov has also served as UNFPA Deputy Regional Director of the Regional Office for Arab States (2014–2015) and Head of the Office in South Sudan (2010).  Prior to these positions, he served in various roles within UNFPA supporting country programmes in Arab States, Eastern Europe, and Central Asia, including as Programme Officer covering Sudan, Somalia, and Iraq and as Humanitarian Response Officer for Operations, in Afghanistan, Palestine and the Great Lakes Region.  From 1992 to 1995 he was an Assistant Professor at Azerbaijan Medical University and a practicing physician.

Mr. Alakbarov holds a Master’s Degree in International Relations from the Fletcher School of Law and Diplomacy, Tufts University, United States, and a Medical Degree and Doctorate from Azerbaijan Medical University, Azerbaijan.  He is fluent in English, French, and Russian.