KABUL - As cultural institutions around the world opened their doors this week for International Museum Day, the expansion of Afghanistan's own National Museum came a step closer to completion.

Renovations to the old building, as well as construction of a new annex, are proceeding and may be ready within four months, and, when complete, greatly increase the repository’s currently limited capacity for displays and exhibits. When the expanded museum opens, it is also expected to cement the museum's recovery from damage sustained during the country’s civil war and launch a new era in which important artifacts can be safely stored and exhibited.

The National Museum of Afghanistan first opened its doors to the public in 1919. It moved to its present location in central Kabul in 1931. Over the years, excavations undertaken around the country added thousands of artifacts from the Prehistoric, Classical, Buddhist, Hindu and Islamic eras, complimenting the Museum's collections of manuscripts, weapons, miniatures and art that had belonged to the former royal family. At its peak, the National Museum's collection included over 100,000 pieces, whereas today it has about 60,000 items. 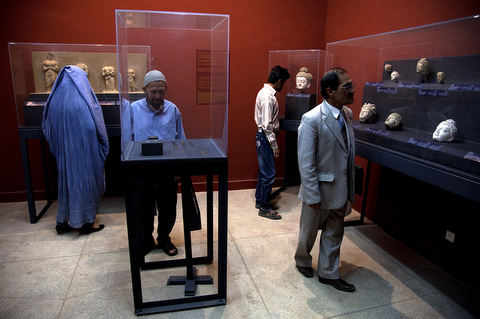 During the civil war in the 1990s and the ensuing rule of the Taliban regime, the Museum was greatly damaged by fighting and its collection was further reduced by looting. With financial support from the US Embassy in Afghanistan, and technical assistance from the United Nations Educational, Scientific and Cultural Organization (UNESCO), the museum is undergoing something of a rebirth.

The design of the new museum drew 72 entrants from around the world, with the winning design chosen by a jury chaired by the Minister of Culture and Information (MoIC). Besides the construction of a new annex, that rebirth includes the development of a database of the Museum's collection, assembled by a team of archeologists drawn from the MoIC and the University of Chicago. According to Mr. Masoodi, such a database is vital to safeguard the collection.

“Around 70,000 to 80,000 historic artifacts of this Museum were stolen and its building was set on fire during civil war,” he said. “During the period of the Taliban, 2500 artifacts that resembled statues, were destroyed.”

Many of the treasures currently on display were saved by museum staff members who had hidden them from the Taliban for safekeeping in bank vaults and other hidden locations. These artifacts were returned to the museum in 2003.

In 2004, UNESCO convened an international conference to help the National Museum rebuild and recover lost treasures. Its director, Mr. Masoodi, said that since 2007 nearly 9,000 pieces have been recovered around the world and returned to Afghanistan.

“During 2005, we prepared a red list of stolen heritages of Afghanistan with the cooperation of the Museums Council, which were then translated into different languages and handed over to Interpol [the International Police Organization],” Mr. Masoodi added.

UNESCO’s office in Afghanistan has been supporting the National Museum in the development of policies and strategies to safeguard its cultural heritage and establish regional museums, as well as training in documentation and preservation of cultural heritage, in accordance with the UN agency’s mission to promote inter cultural dialogue and to preserve cultural heritage for the future generations.