KABUL - Latest figures from the United Nations Assistance Mission in Afghanistan (UNAMA) show a continuing trend of record high civilian casualties, with deaths and injuries from ground engagements in Afghanistan remaining the leading cause.

Today, with the release of UNAMA’s findings from the first quarter of 2015, UNAMA calls on all parties to the conflict to recognize and act to prevent harm to civilians.

“With the seasonal resumption of higher levels of conflict-related violence, the United Nations urges all parties to the conflict to take all necessary measures to protect civilians,” said Nicholas Haysom, the Secretary-General’s Special Representative for Afghanistan and head of UNAMA. “The parties in particular should refrain from using mortars and rockets in any areas populated by civilians.”

UNAMA is particularly concerned about the impact on civilians of further conflict-related operations by the Afghan National Security Forces and Anti-Government Elements in the coming months.

Total civilian deaths and injuries in the first quarter of 2015 followed the record high levels of 2014. Between 1 January and 31 March, UNAMA documented 1,810 civilian casualties (655 deaths and 1,155 injured), a two per cent decrease from the same period in 2014.

The Taliban claimed responsibility for 48 incidents of targeted killings, including deliberate killings of tribal elders, judges, prosecutors and civilian Government workers. Under international humanitarian law, a civilian is any person who is not taking a direct part in hostilities.

“The United Nations calls on the Taliban to cease all attacks against persons who are not taking a direct part in hostilities,” said Georgette Gagnon, Director of Human Rights for UNAMA. “The UN notes that direct attacks on civilians are strictly prohibited under international law which binds all parties to the conflict and may amount to war crimes.”

Casualties caused by suicide attacks remained on par with 2014 levels with 268 civilian casualties (55 deaths and 213 injured).

Civilian casualties from aerial operations by international military forces declined 42 per cent compared to the first quarter of 2014, with 15 civilian casualties (seven civilian deaths and eight injured) recorded from 1 January to 31 March 2015.

“With all signs pointing to increased ground conflict in the coming months, with devastating consequences for civilians, parties must act urgently on the commitments they’ve made to prevent harm to civilians, especially women and children,” said Georgette Gagnon. “The consequences of the conflict go far beyond the horrific loss of life and injury to civilians. Conflict-related violence also devastates Afghan families through displacement, loss of livelihood, destruction of homes and other losses.” 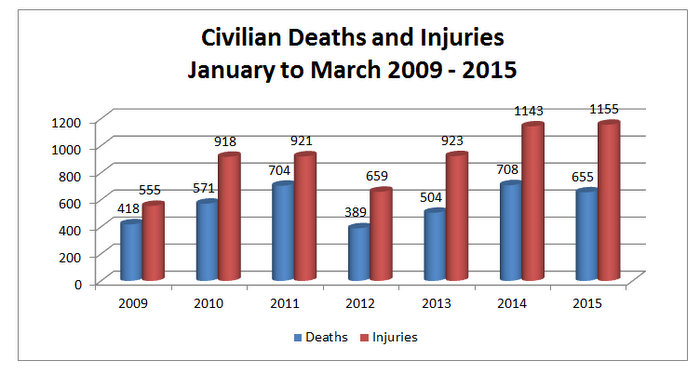 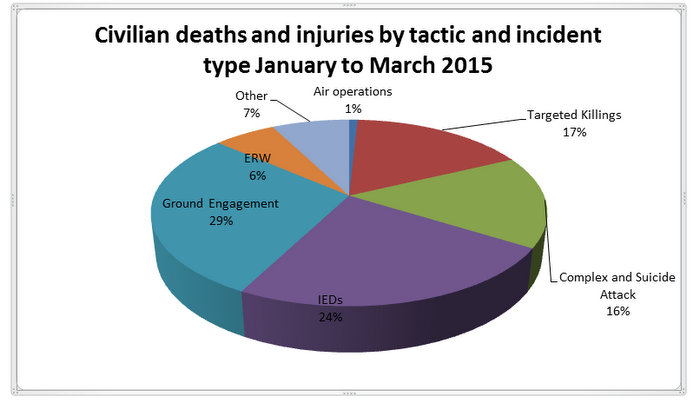 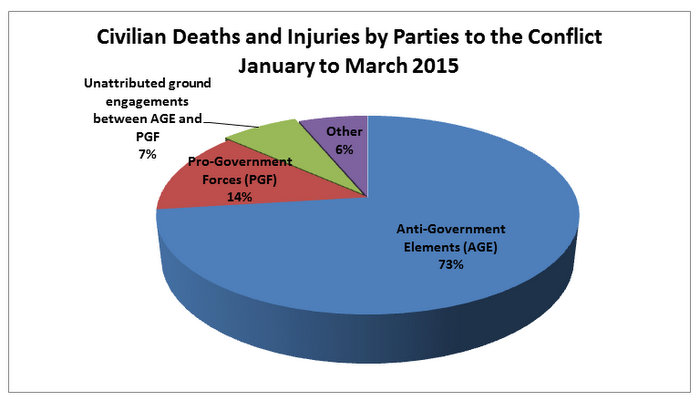 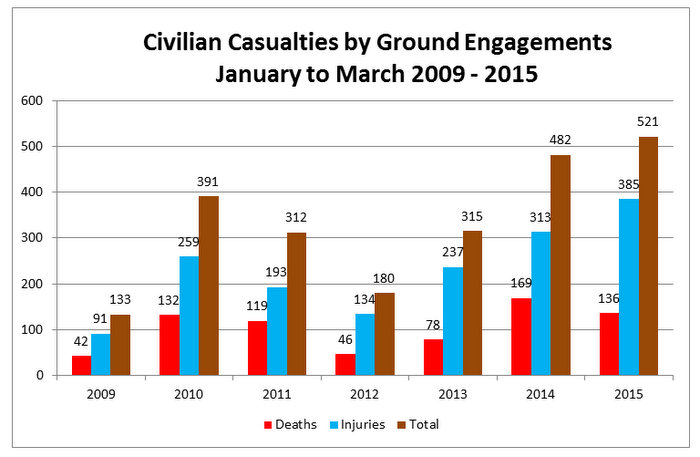