KABUL - The conflict in Afghanistan continues to have a devastating impact on civilians, with the latest UN update released today documenting 3,812 civilian casualties (1,366 deaths and 2,446 injured) in the first half of 2019.

While the number of civilians killed and injured is 27 per cent down from the same period in 2018 –the year that saw record high numbers of recorded civilian casualties– the UN notes with concern disturbing patterns such as the 27 per cent increase in civilian deaths in the second quarter of 2019 compared with the first.

The UN welcomes the reduction in civilian casualties in the 1 January-30 June 2019 period, but continues to regard the level of harm done to civilians as shocking and unacceptable. UNAMA acknowledges that parties have announced efforts to reduce civilian casualties, but they are insufficient. More must be done.

The UN supports the demand for all parties to reduce civilian casualties to zero, made in the joint declaration by Afghan participants from the 7-8 July 2019 Intra-Afghan Dialogue held in Doha.

“Everyone heard the message loud and clear from Afghan delegates in the Doha talks – ‘reduce civilian casualties to zero!’” said Tadamichi Yamamoto, the Secretary-General’s Special Representative for Afghanistan. “We urge all parties to heed this imperative, to answer the call of Afghans for immediate steps to be taken to reduce the terrible harm being inflicted,” added Yamamoto, who is also head of UNAMA.

Anti-Government Elements (AGEs) continued to cause the majority of civilian casualties. However, civilian deaths attributed to Pro-Government Forces (PGFs) exceeded those caused by AGEs for the second quarter in succession.

Ground engagements remained the leading cause of civilian casualties, causing one-third of the overall total, albeit a 16 per cent decrease compared to the first half of 2018. The use of improvised explosive devices (IEDs), mainly in non-suicide attacks, was the second leading cause, representing 28 per cent of the total. Civilian casualties from aerial operations amounted to 14 per cent.

UNAMA attributed 52 per cent of all civilian casualties to AGEs, with 38 per cent attributed to Taliban, 11 per cent to Daesh/Islamic State Khorasan Province (ISKP), and 3 per cent to unidentified AGEs.

UNAMA documented 985 civilian casualties (306 deaths and 679 injured) from AGE attacks that deliberately targeted civilians, including government officials, tribal elders, aid workers, religious scholars, mullahs and places of worship and culture. UNAMA reiterates that civilians not directly participating in hostilities, including civilian government workers, and civilian objects may never be the target of attack. UNAMA urges AGEs to apply a definition of civilian and civilian object that accords with international humanitarian law.

Aerial operations caused 519 civilian casualties (363 deaths and 156 injured), 150 of which were child casualties (89 deaths and 61 injured). This represents a 39 per cent increase in overall civilian casualties from this tactic. While the number of injured decreased, the number of civilians killed more than doubled, highlighting the lethal character of this tactic. UNAMA continues to express concern about the rising level of civilian harm as a result of aerial operations, particularly those conducted in support of Afghan forces on the ground and strikes on civilian structures.

UNAMA attributed 83 per cent of the civilian casualties resulting from aerial operations to International Military Forces, nine per cent to the Afghan Air Force, and the remaining eight per cent to undetermined PGFs.

Women continue to be disproportionately impacted by the armed conflict in Afghanistan. Up to 30 June 2019, the conflict caused 430 women casualties (144 deaths and 286 injured), a decrease of 22 per cent compared to the same period in 2018.

“Parties to the conflict may give differing explanations for recent trends, each designed to justify their own military tactics,” said Richard Bennett, UNAMA’s Human Rights Chief. “The fact remains that only a determined effort to avoid civilian harm, not just by abiding by international humanitarian law but also by reducing the intensity of the fighting, will decrease the suffering of civilian Afghans.” 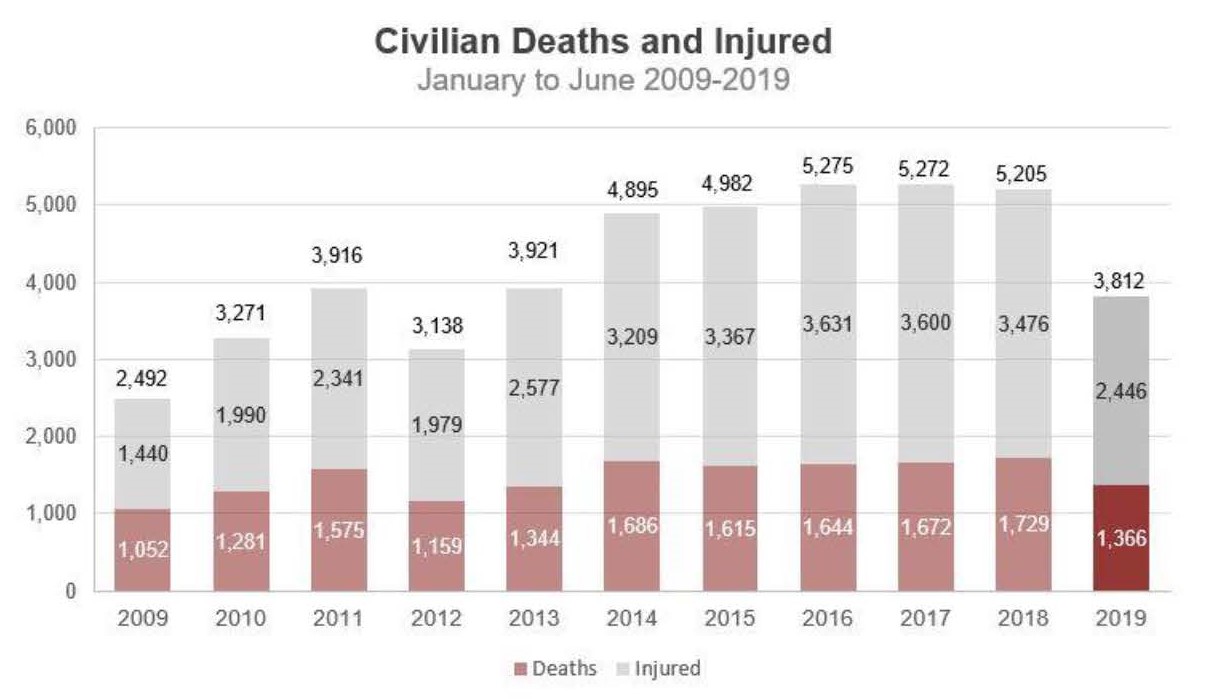 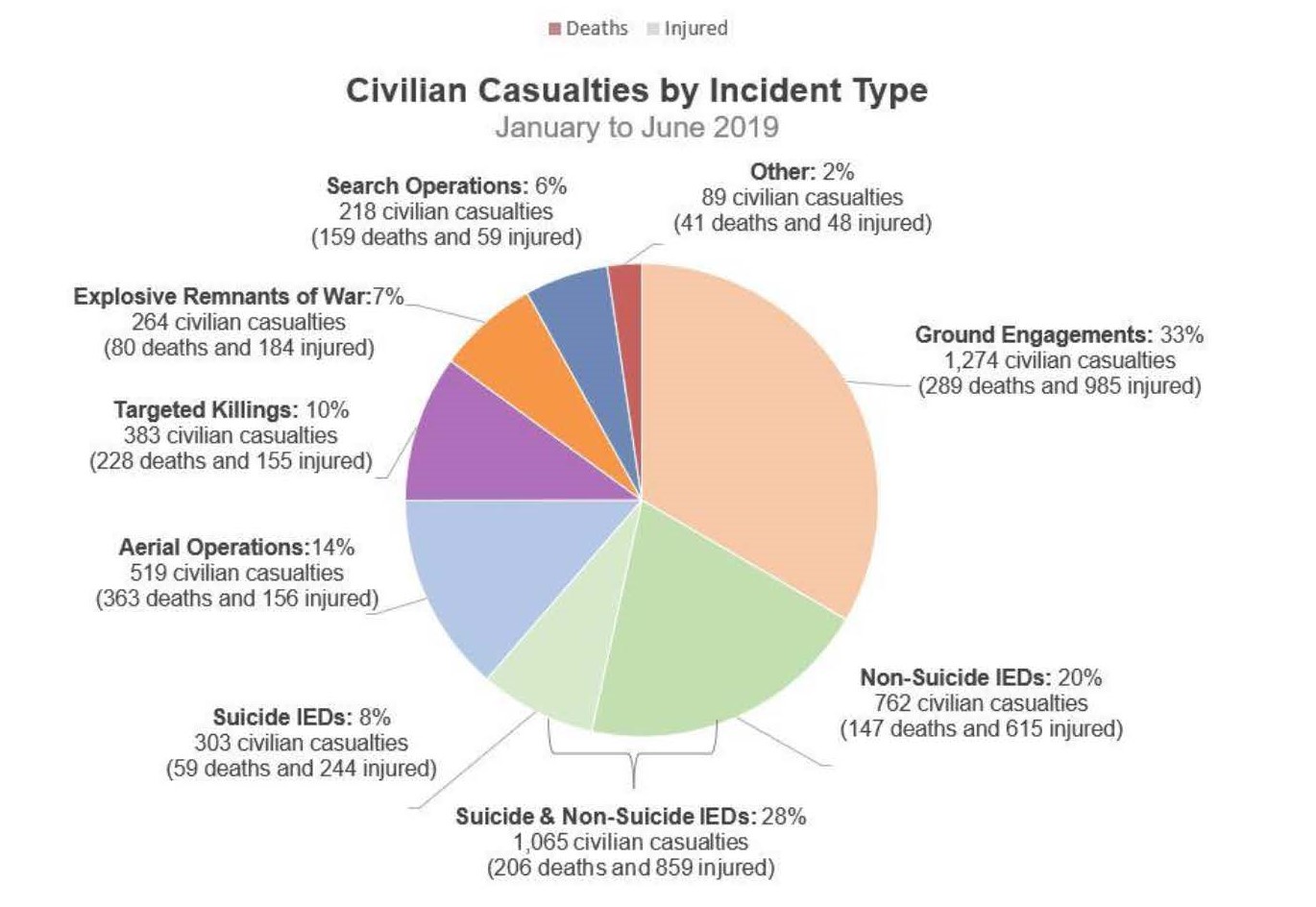 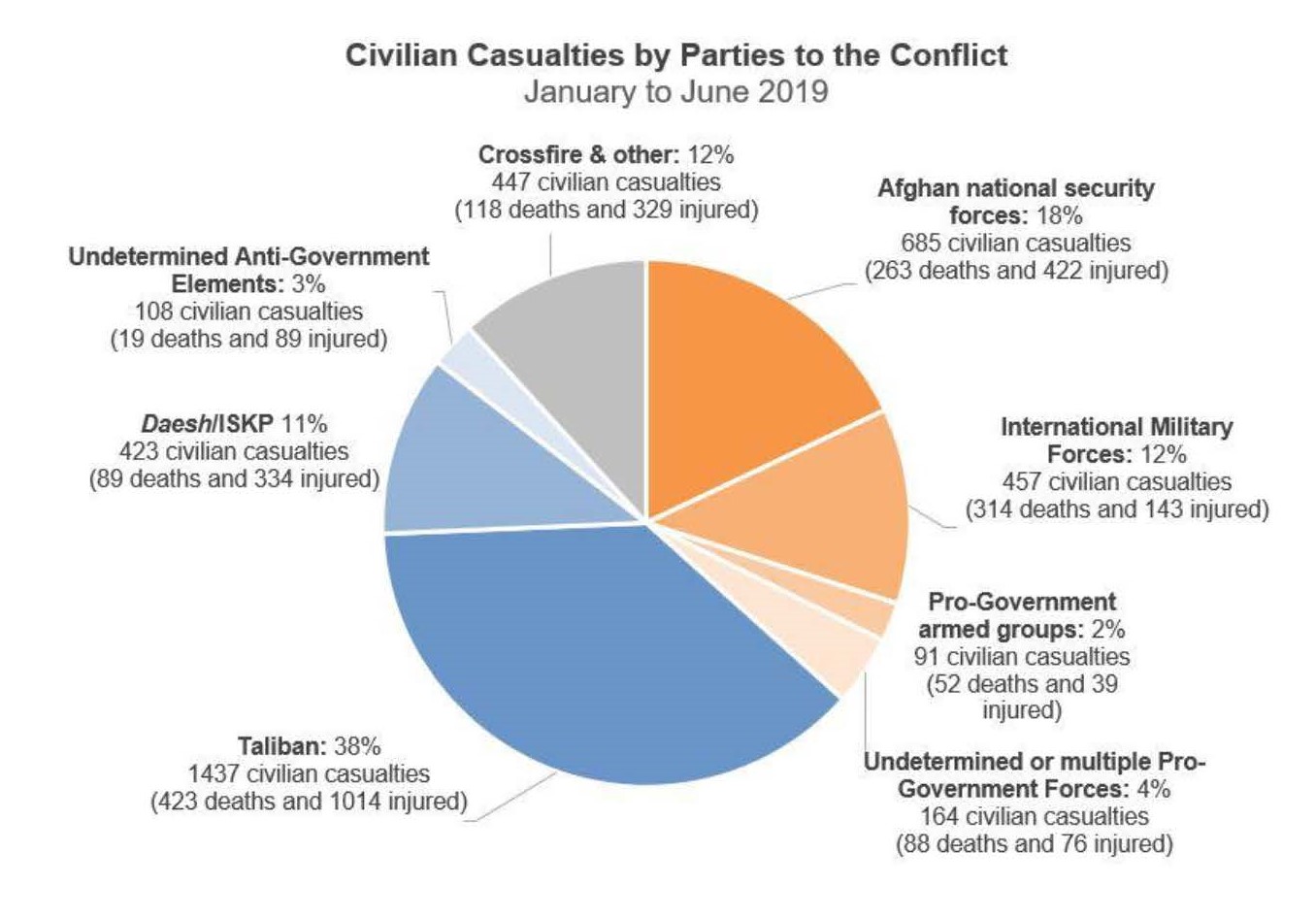 2019 Midyear Update - Protection of Civilians in Armed Conflict, Afghanistan, can be found on UNAMA’s website at: