KABUL - A United Nations report released today predicts an increase in opium cultivation in 12 of Afghanistan’s 34 provinces this year.

A joint production of the UN Office on Drugs and Crime (UNODC) and the Afghan Ministry of Counter-Narcotics, the report, ‘Afghanistan: Opium Risk Assessment 2013,’ attributes the rise in cultivation to insecurity and lack of agricultural assistance to farmers.

The report found “a worrying situation,” particularly in the country’s southern, eastern, western and central provinces.

Afghanistan is the largest producer of the illicit crop in the world. A UNODC report released in November last year – the 2012 Afghanistan Opium Survey – recorded an 18 per cent increase in the area where the illicit crops were cultivated compared to 2011. The 2012 survey also noted that despite the rise in cultivation, opium production dropped by 36 per cent mainly due to “plant diseases and bad weather.”

According to ‘Afghanistan: Opium Risk Assessment 2013,’ the country’s southern region – comprising the provinces of Kandahar, Helmand, Uruzgan, Dai Kundi and Zabul, and which make up some of the relatively more insecure parts of the country – is expected to remain the largest opium cultivating region in Afghanistan, with Helmand retaining its status as the largest cultivating province, followed by Farah in the west. 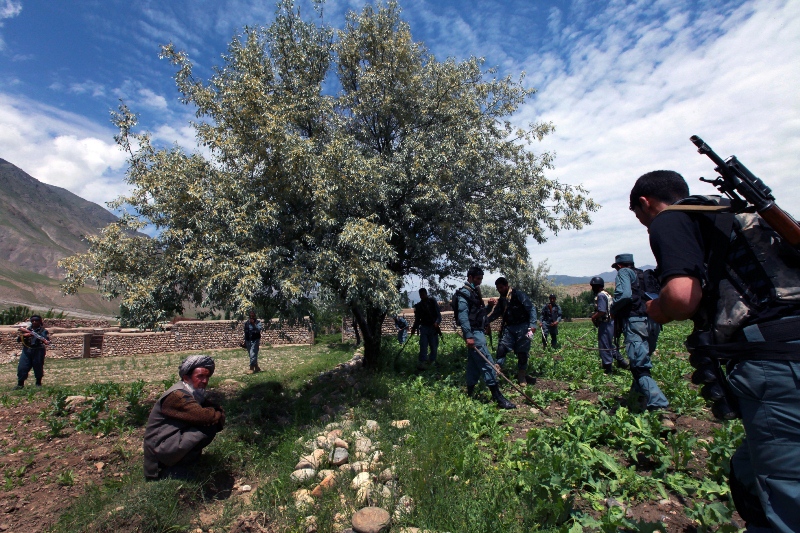 “Villages with a low level of security and those which had not received agricultural assistance in the previous year were significantly more likely to grow poppy in 2013 than villages with good security and those, which had received assistance,” the UN-Afghan Government report states, adding that the villages which had been reached by anti-poppy awareness campaigns were significantly less likely to grow poppy in 2013.

The assessment predicts a decrease in cultivation in only one province, Herat, in the west of the country. The assessment shows a trend in which just 14 provinces will remain poppy-free this year, down from 17 last year and 20 in 2010.

The UNODC representative in Afghanistan, Jean-Luc Lemahieu, said timely government action may prevent the situation from turning too bad. “The government still has time to act (between now and the harvest season),” said Mr. Lemahieu. Poppy harvest time in the country varies from mid-April to July depending on location of provinces.

The assessment conducted during December 2012 and March 2013 found that “high sales price of opium” was the pre-dominant reason for growing poppy. It also found that some drugs traders even made advance payments to farmers to grow opium in southern and western provinces.

The UN-Afghan Government assessment also found “fear of eradication” as the most significant reason given by those farmers who didn’t grow poppy for doing so. In 2012, 9,672 hectares of poppy were eradicated, two and a half times the amount of 2011.

Last month, the UN Security Council, while adopting a resolution renewing the mandate of the UN Assistance Mission in Afghanistan (UNAMA), said it remained concerned at “the serious harm that opium cultivation, production and trafficking and consumption continue to cause to the security, development and governance of Afghanistan as well as to the region and internationally.”

The 15-member Council called on the Afghan Government to accelerate the implementation of the National Drug Control Strategy, including through alternative livelihood programmes, and to mainstream counter-narcotics throughout national programmes.

The Council also asked UNAMA to support the efforts of the Government of Afghanistan in the mobilization of resources, the coordination of international donors, and the direction of the contributions of UN agencies in counter-narcotics, reconstruction and development activities.

- Opium production in Afghanistan drops by 36% despite rise in cultivation