KABUL - The United Nations human rights chief said today that the Afghan Government should make extra effort to ensure that the country’s human rights gains of the past are not sacrificed to political expediency in the months leading up to next year’s elections.

“My concern that the momentum of improvement in human rights may have not only peaked, but is in reality waning, has not been allayed,” the UN High Commissioner for Human Rights, Navi Pillay, told a news conference in the Afghan capital, Kabul, at the end of a two-day visit.

“Afghanistan is clearly at a critical juncture with the ongoing political, security and economic transition concluding in 2014 – all of which will have an impact on the human rights of its citizens,” she added. "There have been some distinct human rights achievements during the past 12 years, but they are fragile, and many Afghans are expressing fears that the overall human rights situation is deteriorating on several fronts.”

During her visit, Ms. Pillay met President Hamid Karzai, the Ministers of Foreign Affairs and Interior, the head of the National Directorate of Security, the Deputy Chief Justice of the Supreme Court, the head of Afghanistan Independent Human Rights Commission (AIHRC), members of civil society, the Deputy Commander of the International Security Assistance Force (ISAF) and the Deputy Senior Civilian Representative of the North Atlantic Treaty Organization (NATO), in addition to senior UN officials, including the head of the UN Assistance Mission in Afghanistan (UNAMA, the Secretary-General’s Special Representative, Jan Kubiš. 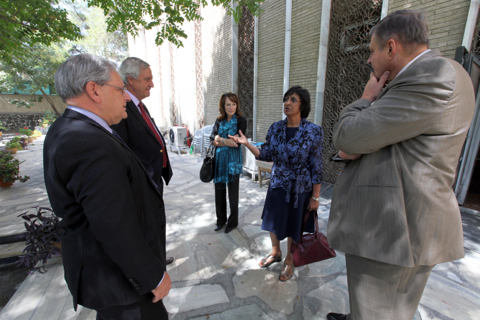 This was her first visit to the war-affected country.

Afghanistan is slated to hold an election on 5 April next year to choose its new leader, replacing President Karzai. The following year, Afghanistan will hold elections for its National Assembly.

The political transition coincides with security transition. In June, the Afghan security forces, for the first time since 2001, assumed full responsibility of securing their country from their international allies, who are ending their combat mission by the end of 2014. Simultaneously, the country is engaged in peace and reconciliation efforts with the main armed opposition group, the Taliban.

The UN human rights chief said her visit had three main foci: the importance of ensuring the country’s human rights gains over the past 12 years are consolidated, the issue of violence against women, and the future of the AIHRC.

On Afghanistan’s human rights gains, Ms. Pillay said that ensuring their consolidation will take determination and courage on the part of the President and the Government, and on the part of many thousands of State employees at both the national and provincial levels, and of Afghanistan’s active civil society and media. 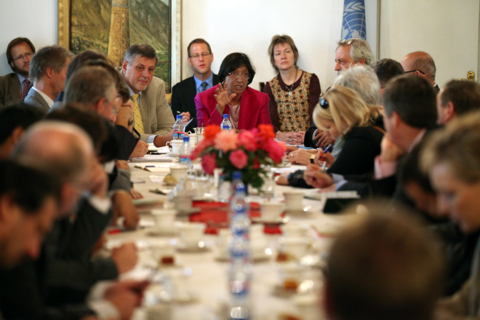 “They will need to stand firm, not only against rising political pressures as the election approaches, but also against the ominous background of a sharp climb in the number of civilian casualties during the first six months of 2013,” she said, referring to findings of a UNAMA report released on 31 July. The Mid-Year Report on the Protection of Civilians in Armed Conflict in Afghanistan found a 23 per cent rise in the number of civilian casualties over the first six months of 2013 compared to the same time period last year.

On the issue of violence against women, Ms. Pillay said it remains endemic and much more needs to be done, especially in rural areas. She urged authorities to do their utmost to speed up and improve the implementation of the Elimination of Violence Against Women (EVAW) law, which President Karzai passed in 2009.

The law criminalizes numerous forms of violence, including child marriage, forced marriage, the selling and buying of women for the purpose or under the pretext of marriage, the traditional practice of ba’ad which requires the giving away of a woman or a girl to settle a dispute, forced self-immolation and 17 other acts of violence including rape and physical abuse, while also specifying punishment for the perpetrators.

“I also noted the widespread concern among civil society groups that the momentum on advancing women’s rights has halted, and indeed may even be regressing,” Ms. Pillay told today’s news conference. 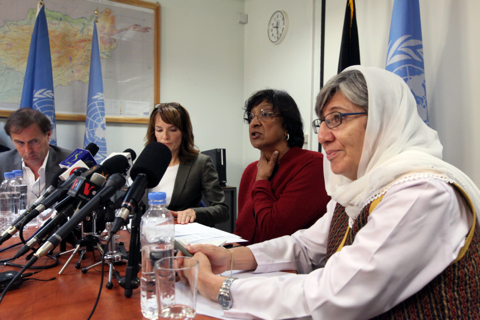 UNAMA releases reports annually on the implementation of the landmark law with the latest report, from December 2012, noting that although prosecutors and courts were increasingly applying the EVAW law in a growing number of reported incidents of violence against women, the overall use of the law remained low indicating there is still a long way to go before women and girls in Afghanistan are fully protected from violence through the EVAW law. The same report said the application of the law continued to be hampered by “dramatic under-reporting” and a lack of investigation into most incidents of violence against women.

On the future of the AIHRC, for which there have been national and international unease stemming from the appointments process of its five new commissioners, Ms. Pillay highlighted the body’s role as an “extremely important national institution.” She warned that there are “real concerns” that the process was “sufficiently flawed” for it to lose its ‘A’ status under the Paris Principles, an international peer-run system of accreditation for national human rights bodies, which now exist in more than 100 states worldwide.

“This would be a very serious and regrettable setback for one of the current Afghanistan Government’s most notable achievements in the area of human rights,” Ms. Pillay said. “It is essential that the AIHRC is strengthened, not weakened, and I made a strong plea to President Karzai, who is in a position to rectify the problem, to do his utmost to strengthen the position of the AIHRC before it comes up for review in two months’ time.”