Civilian casualties in Afghanistan rise by 22 per cent in 2014

Civilian casualties in Afghanistan rise by 22 per cent in 2014

KABUL - Increased ground engagements between parties to the armed conflict in Afghanistan are behind a 22 per cent rise in conflict-related deaths and injuries of Afghan civilians in 2014, the United Nations Assistance Mission in Afghanistan (UNAMA) said today on the release of its 2014 Annual Report on Protection of Civilians in Armed Conflict, prepared in coordination with the Office of the United Nations High Commissioner for Human Rights.

For the first time since 2009, more Afghan civilians were killed and injured in ground engagements than by improvised explosive devices (IEDs) or any other tactic. The report found that civilian deaths and injuries from ground operations surged by 54 per cent making them the leading cause of civilian casualties and the biggest killers of Afghan women and children in 2014.

The rise in civilian casualties in 2014 resulted mainly from increased ground engagements across Afghanistan in which parties to the conflict increasingly used explosive weapons systems such as mortars, rockets and grenades, sometimes indiscriminately, in civilian-populated areas with devastating consequences for civilians. The increased indiscriminate use of IEDs and increased number of suicide attacks by Anti-Government Elements added to the rising civilian casualties in 2014.

“In communities across Afghanistan, increased ground fighting among parties to the conflict and more IED attacks exacted a heavy toll on Afghan civilians,” said the United Nations Secretary-General’s Special Representative for Afghanistan and head of UNAMA, Nicholas Haysom. “Rising civilian deaths and injuries in 2014 attests to a failure to fulfil commitments to protect Afghan civilians from harm. Parties to the conflict should understand the impact of their actions and take responsibility for them, uphold the values they claim to defend, and make protecting civilians their first priority. We need to see concrete steps and a real drop in civilian casualties in 2015.” 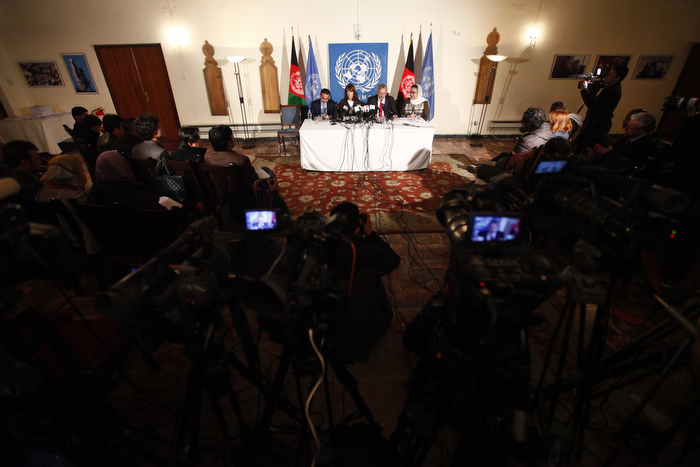 As the withdrawal of international military forces and combat air support continued in 2014, UNAMA observed more frequent and larger ground operations by both Afghan national security forces and Anti-Government Elements in several regions with fighting often occurring in and near district centres. Increased ground fighting in civilian populated areas with all parties using mortars, other explosive weapons and small arms fire frequently resulted in deaths and injuries to civilians caught in the crossfire.

The UNAMA report found that half of all civilian casualties from ground engagements were from the use of indirect weapons with a wide-area impact, mainly mortars, along with rockets and grenades by all parties. UNAMA recorded 1,788 civilian casualties (447 killed and 1,341 injured) from mortars, rockets and grenades, a 73 per cent increase from 2013. 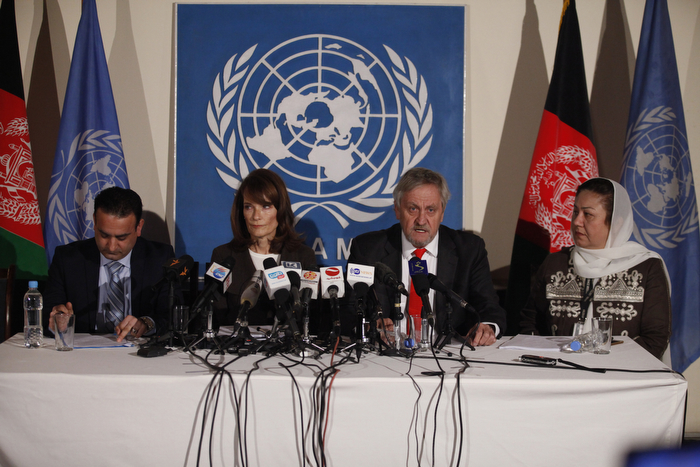 To highlight the broader social and economic impact of the conflict on the lives of Afghan women, UNAMA interviewed 60 women from all regions in Afghanistan whose husbands, all civilians, were killed or seriously injured from conflict-related violence in 2014. UNAMA found that women who were left as sole income-providers for their households after the death or injury of their husbands often experienced long-term negative social and economic consequences, with poverty forcing many women to give their daughters in marriage in exchange for debts or to take their children out of school often to work. Widowed women were often particularly vulnerable to other forms of violence and abuse from family and community members. These findings call for urgent action by the Government of Afghanistan to address the basic needs of this group of very vulnerable and often marginalized women and their children.

“For Afghan women and children, the anguish of losing a husband and father in the conflict is often only the beginning of their suffering and hardship,” said the UNAMA Director of Human Rights, Georgette Gagnon. “The long-term social and economic consequences are devastating affecting the most vulnerable the hardest. After a year in which conflict-related violence led by ground engagements killed and injured record numbers of women and children, the destruction and damage to Afghan lives must be met with a new commitment by all parties to avoid harm to Afghan civilians.”

Targeted killings of civilians by Anti-Government Elements accounted for 11 per cent of all civilian casualties, with UNAMA recording 1,114 casualties (753 killed and 361 injured), down five per cent from 2013. These included killings of tribal elders, civilian Government officials, mullahs and civilian justice officials.

The report found that four per cent of all civilian casualties in 2014 were caused by explosive remnants of war and two per cent from aerial operations by international military forces. 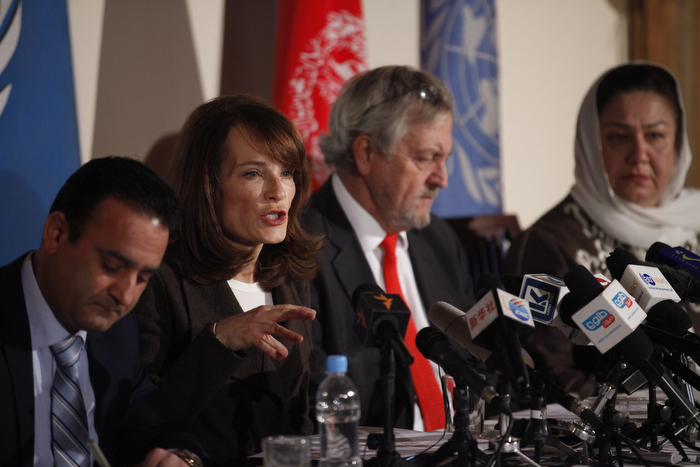 In 2014, UNAMA documented increased incidents of Anti-Government Elements, including the Taliban, punishing civilians for alleged infractions of sharia law, perceived offences and allegations of spying. Incidents recorded included Anti-Government Elements’ carrying out summary executions, beheadings, amputations of body parts, beatings, lashings and illegal detention. UNAMA highlights that such parallel judicial structures are illegal and have no legitimacy or basis under the laws of Afghanistan. Punishments meted out by these structures amount to human rights abuses, criminal acts under the laws of Afghanistan, and, in some circumstances, war crimes.

“The appalling levels of violence in Afghanistan in 2014 should not be repeated in 2015,” said Special Representative Haysom. “Parties to the conflict, in particular the Anti-Government Elements, should do everything in their power to prevent civilian casualties in line with their obligations under international humanitarian law.  This means that Anti-Government Elements should now abide by their public commitments to avoid civilian casualties by preventing or ceasing the use of IEDs and mortars in civilian-populated areas, and stop deliberately attacking civilians.” 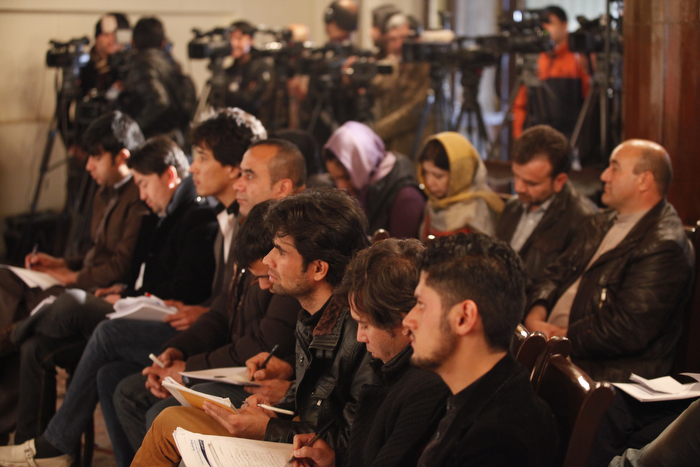 “It was midnight and we were all asleep. A mortar round landed in our bedroom and injured my two small daughters and I. Everybody in the house ran to our bedroom and saw that we were buried in rubble. They started to take us out of the debris when a second mortar round landed, injuring my third small daughter and my son. My wife and my nephew, who were not hurt, continued trying to help us, when a third mortar round landed in the compound, this time killing my wife and injuring my nephew and my fourth daughter. I do not know who fired all the rockets since both Taliban and Afghan national security forces use mortar rounds and rockets against each other. I have no life anymore, since I have no money to take care of my injured children’s health and no money left to feed them.”

-- Man whose wife was killed and whose four daughters, son and nephew were injured when multiple mortar rounds landed on their house in Sangin district, Helmand province, during a ground engagement between Afghan national security forces and the Taliban on 16 June 2014.

“It was in the afternoon. I was doing construction work in a building. My wife called me crying and told me to return home immediately because an explosion had killed our children. I was shocked and collapsed. Other workers helped me and took me to my home. My wife told me that all the injured and the killed were taken to hospitals. I went to a nearby hospital and saw my nine-year-old son lying dead on a bed. I was told that my other son was also dead. Then I saw my little daughter who was seriously injured, and my other son who was also severely injured, covered in blood. My daughter died the following day. It was such grief for me. Oh Allah Almighty, I lost three children! What was the crime committed by my children? They were playing, as usual, outside our house. I was told that it was a remote-controlled bomb and that the target was an Afghan National Army officer. Why don’t the Taliban care about civilians, women and children? Which civilization, which law are the Taliban following? It is very simple: killing children and civilians is completely against Islamic law.”

“The wedding ceremony was transformed into a funeral when our house was hit by mortar rounds fired by the Afghan National Army. We do not know why we were targeted or why we have suffered casualties for nothing. Who can we approach to listen to us? I am sure that no-one but Allah can hear us and understand what is happening in our area.”

-- Relative of a groom whose wedding party was hit by mortars fired by the Afghan National Army in Sangin district, Helmand province on 31 December 2014.

“I am an illiterate woman and cultural sensitivity means that women are not allowed to work outside and support their families, so I am not able to provide economically. My three children who were at school before my husband was killed have now dropped out and work as shepherds to support our family.”

UNAMA makes the following recommendations in its 2014 Annual Report to improve the protection of civilians:

In compliance with obligations under international humanitarian law: 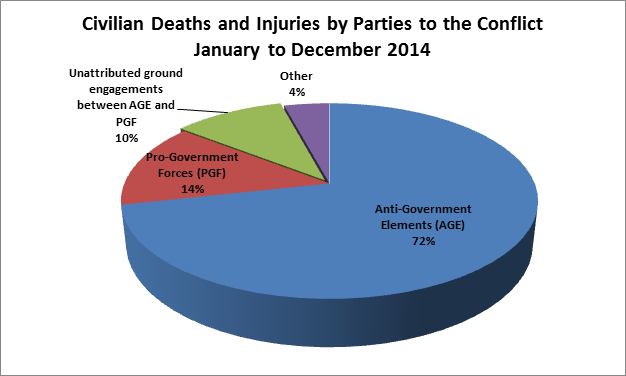 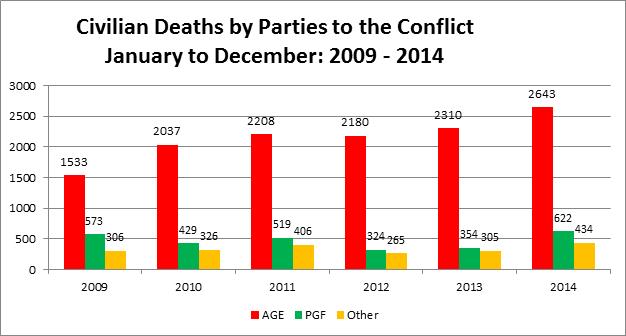 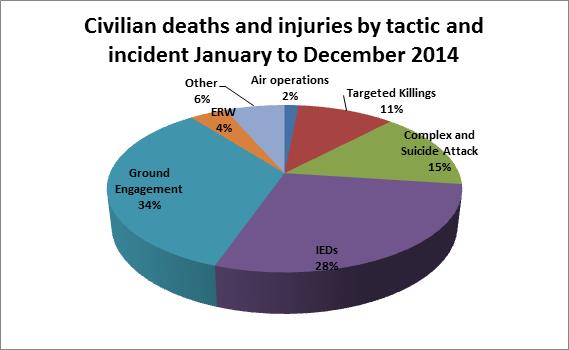 Click here for the full transcript of today's press conference organized to release the UNAMA report.]