This week, UNAMA heard from women leaders in a series of events across Afghanistan on the urgent need for their meaningful participation in decision-making, protection from violence, and access to education, work and justice. The Global Open Day events marked the 22nd anniversary of UN Security Council Resolution 1325 on Women, Peace, and Security.

Women in Kabul asked the United Nations to help open spaces for dialogue between them and Afghanistan’s de facto authorities, to help them increase economic and education opportunities, to restore their basic rights and to safeguard the achievements on gender empowerment.

“We see the challenges you're facing, and like you, we believe change is possible. We’re constantly reminding the authorities of the State’s obligations as party to human rights and women rights conventions”, Markus Potzel, Deputy Special Representative for Afghanistan, said at an event in the Afghan capital. 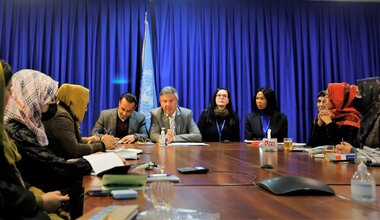 More than 100 women in several regions of the country, and from different backgrounds, organizations and entities, engaged in wide ranging discussions on the four pillars of UNSC Resolution 1325: participation; protection; prevention; and relief & recovery.

The discussions resulted in a list of recommendations to the international community, the authorities and to women themselves. These included, among others: (1) for the UN to facilitate dialogue between women and the authorities; (2) Asking the UN to establish a communication mechanism which would allow women to quickly bring issues to the attention of the authorities; (3) for the UN and International community to continue to press authorities on the need for the respect of rights of women; (4) for the authorities and the UN to intensify efforts towards women entrepreneurship and economic empowerment, capacity building and education; (5) for prevention and accountability for cases of violence against women; and (6) for women to abandon cultural practices that cause harm and that perpetuate gender inequality and oppression.

In Kunduz, women called on the de facto authorities to follow the example of other Islamic states which allow education for women and girls of all ages. And, in Herat, they highlighted that before Afghanistan’s political changes in August 2021, women had been active in peace education in the western city and remote districts working for the prevention of violence within tribes, communities and families operating under a protective legal framework and in cooperation with dedicated institutions to facilitate women’s engagement. In the current context, “gender discrimination against women and their exclusion from decision-making mechanisms is systematic”, they stressed.

The Global Open Day initiative was launched by the UN in 2010 to review the implementation of Resolution 1325 on Women, Peace and Security. Held worldwide, Global Open Days allow women to discuss their efforts to promote peace and security and propose changes to policy and legislation.

Resolution 1325 recognized that women and girls are disproportionately affected by conflict and stresses the need to increase their role in conflict prevention and resolution.