KABUL – There was a rise in civilians killed and injured in Afghanistan following the start of peace negotiations in September, although overall numbers for 2020 were down due to lower civilian casualty rates earlier in the year, according to a report released today by the UN Assistance Mission in Afghanistan (UNAMA) and the UN Human Rights Office.

The Afghanistan Protection of Civilians in Armed Conflict Annual Report 2020 documents the appalling level of harm inflicted on civilians and traces the disturbing spike in violence against them in the last quarter of the year.

“2020 could have been the year of peace in Afghanistan. Instead, thousands of Afghan civilians perished due to the conflict,” said Deborah Lyons, the Secretary-General’s Special Representative for Afghanistan. “This important report has the overriding objective of providing the parties responsible with the facts, and recommendations, so they take immediate and concrete steps to protect civilians. I urge them not to squander a single day in taking the urgent steps to avoid more suffering.”

“Ultimately, the best way to protect civilians is to establish a humanitarian ceasefire,” said Lyons, who is also head of UNAMA. “Parties refusing to consider a ceasefire must recognize the devastating consequences of such a posture on the lives of Afghan civilians.”

For a seventh consecutive year, UNAMA documented more than 3,000 civilians killed in a single year, with Afghanistan remaining among the deadliest places in the world to be a civilian.

A distressing feature of the conflict remains the shocking and disproportionate impact on Afghan women and children. They make up 43 per cent of all civilian casualties: child casualties numbered 2,619 (30 per cent) and women 1,146 (13 per cent). More women were killed in the conflict in 2020 than any year since UNAMA began systematic documentation in 2009. In total 1,150 women and children were killed (390 women and 760 children).

The overall number of civilian casualties in 2020 of 8,820 (3,035 killed and 5,785 injured) fell below 10,000 for the first time since 2013 and was 15 per cent down on 2019. While the reduced numbers are welcome, documentation shows that the lower levels of overall harm were partially offset by increases from certain tactics, as well as from an uncharacteristic increase in civilian harm in the last quarter of the year.

Afghanistan Peace Negotiations, that began between representatives of the Islamic Republic of Afghanistan and the Taliban in Qatar on 12 September, failed to alleviate the scale of civilian harm, a key indicator of violence levels. Instead, there was an escalation of violence with disturbing trends and consequences.

For the first time since it began systematic documentation in 2009, UNAMA documented an increase in the number of civilian casualties recorded in the fourth quarter compared with the third quarter. In addition, this period marked a 45 per cent increase in civilian casualties in comparison to the same three months in 2019, especially from the use of improvised explosive devices (IEDs) and targeted killings.

In October, civilian casualties were the highest of any month in 2020, and the following month UNAMA documented the highest number of civilian casualties of any November since records began in 2009. Alongside the overall increase in violence, as the year ended, the population was confronted with a spate of targeted killings, referred to by many as “assassinations”, including civilians from the media, civil society, judiciary and the civilian government administration, as well as family members of combatants.

The United Nations Secretary-General and the Security Council have consistently called for a global humanitarian ceasefire as the best way to protect civilians. Without any end to the conflict, parties need to prevent and mitigate civilian casualties, including through adhering to the report’s recommendations. The report also reminds the parties that attacks deliberately targeting civilians or civilian objects are serious violations of international humanitarian law that may amount to war crimes.

Anti-Government Elements (AGEs) in 2020 caused the majority of civilian casualties (62 per cent), totalling 5,459 casualties – 1,885 killed and 3,574 injured with the Taliban responsible for most of these casualties (45 per cent of the total) and Islamic State in the Levant-Khorasan Province (ISIL-KP) responsible for 8 per cent.

Pro-Government Forces (PGF) caused a quarter of all civilian casualties, totalling 2,231 (841 killed and 1,390 injured), a decrease of 24 per cent from 2019, with the Afghan national security forces causing most of these (22 per cent of the total).

Strikingly, international military forces in 2020 were responsible for their lowest recorded number of civilian casualties since UNAMA began documentation in 2009. In 2020, this figure was 120 civilian casualties, down from 786 in 2019, a decrease of 85 per cent.

A matter of profound concern remains the continuation of attacks deliberately targeting civilians by AGEs. This includes attacks targeting members of the judiciary, media and civil society, as well as religious minorities, especially the Shi’a Muslim population, most of whom also belong to the Hazara ethnic group, and the Sikh population.

Indiscriminate attacks, such as the use of pressure-plate IEDs by the Taliban also remain of concern. These devices are victim-activated and cannot be directed towards a specific target. Similarly, concerns remain about vehicle-borne IEDs that cause many civilian casualties due to the large explosive power used, even if they are not directed against civilians or civilian objects.

Ground engagements were the leading cause of civilian casualties in 2020 (36 per cent), a slight increase compared with 2019. They were followed by AGE suicide and non-suicide attacks using improvised explosive devices (34.5 per cent), a 30 per cent decrease. AGE targeted killings (14 per cent) increased by 45 per cent; and PGF airstrikes (8 per cent) were down 34 per cent.

Through post incident interviews with victims and their family members, UNAMA identified that more needs to be done by parties in acknowledging and taking responsibility for the harm they caused. The majority of victims interviewed continued to require financial assistance, protection, medical care, and psychosocial support in the aftermath of an incident. Many knew little if anything about whether an investigation was being undertaken, and sought justice, information and/or an apology by those responsible.

“The ever-growing number of women, men, boys and girls affected by the conflict need to be remembered. They have lost loved ones, suffered injuries, have had to leave their homes and face economic and social difficulties. In too many cases they feel abandoned,” said Fiona Frazer, UNAMA’s Human Rights chief. “They ask that their grief be recognised, their voices heard and an end to the conflict. 2020 was the year when Afghans dared to hope for peace, instead they found themselves facing more violence.” 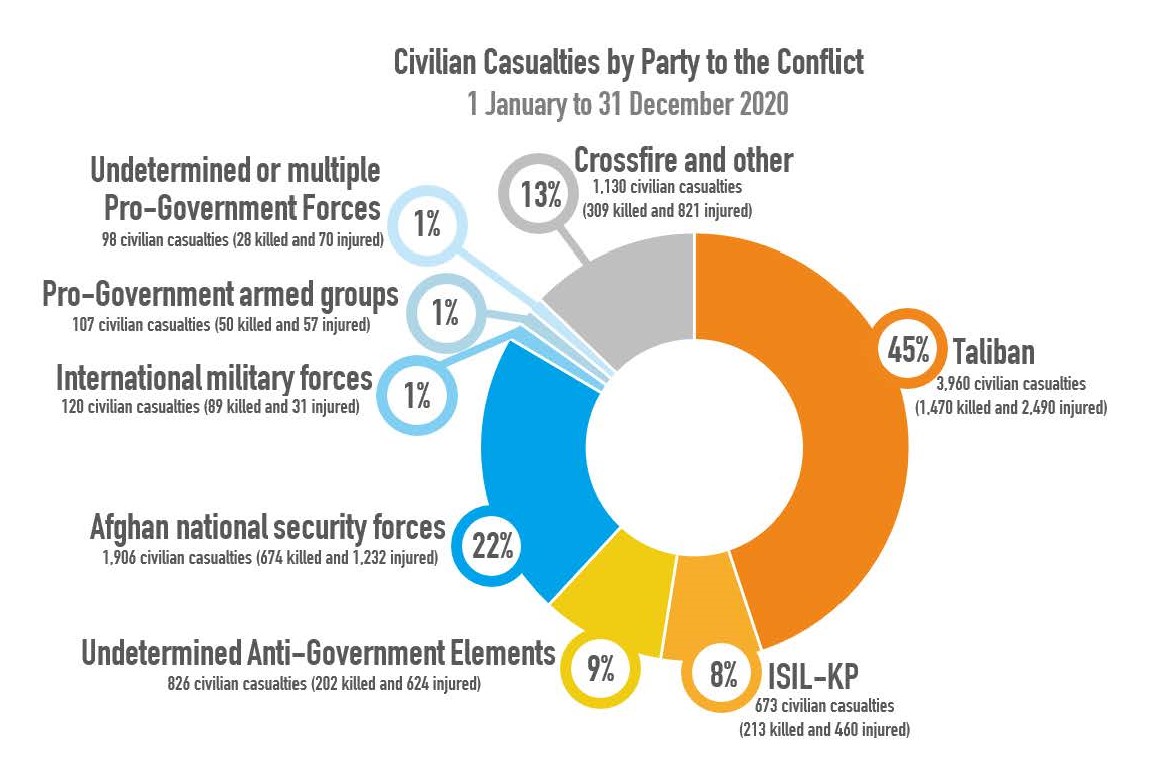 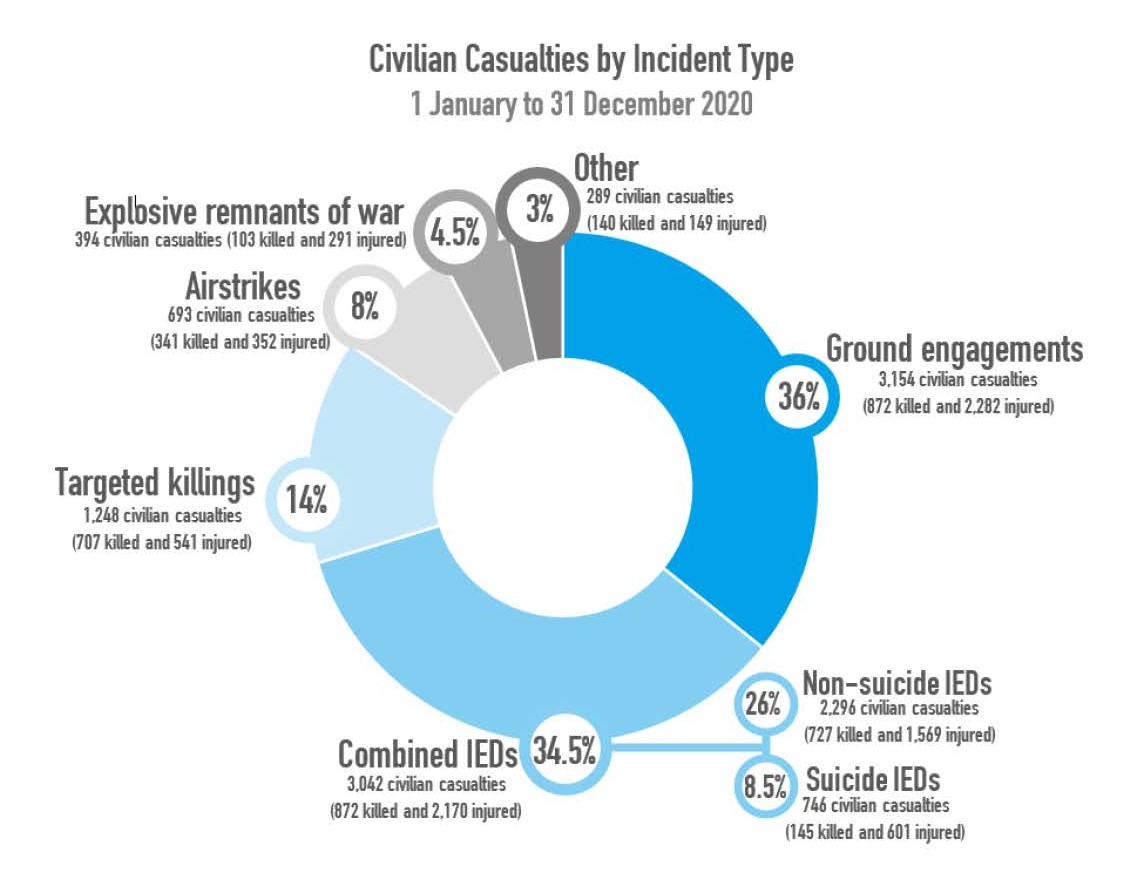