KUNDUZ: ‘Cases of violence against women should be referred to official judicial organs’

KUNDUZ: ‘Cases of violence against women should be referred to official judicial organs’

KUNDUZ - Kunduz Provincial officials and UNAMA highlighted the importance of resolving cases of violence against women through judicial organs rather than local informal mechanisms, in the northeastern Afghan province yesterday.

Speaking at a conference organized by UNAMA in cooperation with local Government authorities, the European Union Police Mission (EUPOL), the Government of the Netherlands, Nadera Geyah, the head of the Kunduz Department of Women’s Affairs, said the conference aimed to discuss and convince the participants to address cases of violence against women through official mechanisms.

“Mostly if the Jirgas (unofficial local councils) settle such cases, it will result in revenge among the families. Let’s gradually refer the women’s cases to judicial mechanisms,” said Ms. Geyah. 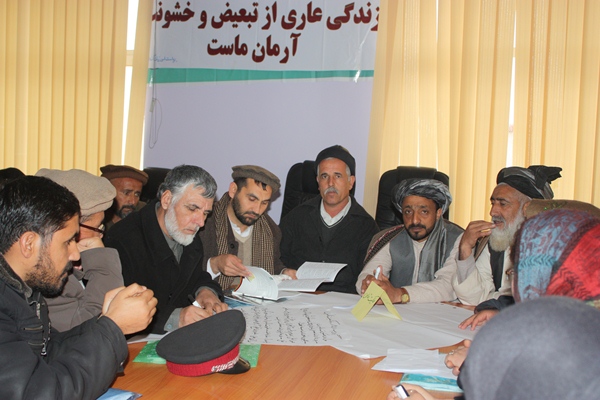 The conference saw participation of Government officials, judicial officials including judges and prosecutors, civil society representatives, rights defenders, lawyers and religious leaders – all of them dealing with women’s cases – from all seven districts of Kunduz.

According to the Afghanistan Independent Human Rights Commission, in Kunduz alone, 16 women have been killed in violent incidents since March 2012, whereas only 70 cases of violence against women were registered in the past 10 months.

Hamdullah Danushi, the deputy Governor of Kunduz, highlighted the rights of women from the perspective of Islam. “In some cases women have even more privileges than men in Islam,” said Mr. Danushi.

Brigid Kennedy of UNAMA said “correct knowledge” of the law and how to properly handle these cases would guide the community leaders, officials and activists as they approach situations of violence against women.

Ms. Zufunoon, a participant from Khanabad district, linked the community-level harmful traditional practices to informal conflict resolution mechanisms. “If a woman approaches a judicial organ for her case registration and follows up, her relatives and neighbours blame her,” said Ms. Zufunoon, highlighting the deep-rooted misperception among community-level people.