KABUL – More civilians were killed in the Afghan conflict last year than at any time since records have been kept, according to a United Nations report released today by the UN Assistance Mission in Afghanistan (UNAMA) and the UN Human Rights Office. The report documented 3,804 civilian deaths in 2018. Among the dead were 927 children, the highest recorded number of boys and girls killed in the conflict during a single year.

Key factors contributing to the significant increase in civilian casualties were a spike in suicide attacks by AGEs, mainly Daesh/ISKP, as well as increased harm to civilians from aerial and search operations by Pro-Government Forces. 2018 witnessed the highest number of civilian casualties ever recorded from suicide attacks and aerial operations.

“The report’s rigorously researched findings show that the level of harm and suffering inflicted on civilians in Afghanistan is deeply disturbing and wholly unacceptable,” said Tadamichi Yamamoto, the Secretary-General’s Special Representative for Afghanistan. “All parties need to take immediate and additional concrete steps to stop a further escalation in the number of civilians harmed and lives destroyed.”

Yamamoto, who also heads UNAMA added, “This is the UN’s tenth annual report documenting the plight of civilians in the Afghan conflict –more than 32,000 civilians killed and around 60,000 injured in a decade. It is time to put an end to this human misery and tragedy. The best way to halt the killings and maiming of civilians is to stop the fighting. That is why there is all the more need now to use all our efforts to bring about peace. I urge all parties to seize every opportunity to do so.”

“The conflict in Afghanistan continues to kill far too many civilians and has caused long-lasting suffering, both physical and psychological, to countless others,” said UN High Commissioner for Human Rights Michelle Bachelet. “The fact that the number of children killed this year is the highest on record, is particularly shocking. In addition to the lives lost, the dire security situation is preventing many Afghans from enjoying their economic, social and cultural rights, with thousands of children already handicapped for life because of attacks on schools and medical facilities,” Bachelet added. “So I call on all parties to the conflict to fully respect international humanitarian and international human rights law to protect the lives of all civilians.”

UNAMA notes continued concern with the Taliban’s use of indirect weapons systems and IEDs, particularly targeting civilians and civilian objects during election-related attacks, as well as using the weapons against Pro-Government Forces in civilian areas, which has indiscriminate effects. The increase in deliberate targeting of civilians by Taliban, which nearly doubled from 865 civilian casualties in 2017 to 1,688 in 2018, resulted largely from the 27 January suicide ambulance attack in Kabul (the deadliest single incident ever recorded by UNAMA) and from election-related attacks on the 20 October polling day, when UNAMA recorded the highest number of civilian casualties in any single day in 2018. Civilian casualties resulting from deliberate targeting of civilians by Daesh/ISKP, which included attacks against the Shi’a Muslim population, more than doubled.

Search operations caused 353 civilian casualties (284 deaths and 69 injured) with the majority caused by National Directorate of Security Special Forces and the Khost Protection Force, both of whom are supported by international military forces.

In 2018, approximately the same number of civilians were killed from airstrikes as in 2014, 2015 and 2016 combined. Women and children continued to comprise almost two-thirds of all civilian casualties from aerial operations, amounting to 648 civilian causalities (320 deaths and 328 injured).

In 2018, international military forces were responsible for 674 civilian casualties (406 deaths and 268 injured), 94 per cent of which resulted from aerial operations.

The armed conflict continues to have a severe impact on children and women, who made up 38 per cent of all civilian casualties. Child casualties represented 28 percent of all killed and injured. UNAMA recorded 3,062 child casualties (927 deaths and 2,135 injured). While this was a slight decrease compared to 2017, child deaths reached record high levels in 2018, mainly due to the more than doubling of child deaths from aerial operations, as well as an increase in child deaths from suicide attacks.

Women casualties reduced by six per cent to 1,152 (350 deaths and 802 injured), resulting mainly from the eight per cent decrease in women casualties from ground engagements. Women comprised 10 per cent of conflict-related civilian casualties in 2018.

In the report, UNAMA acknowledges the efforts taken by the Afghan national security forces, international military forces, and Taliban to protect civilians from harm caused. However, given the scale and scope of civilian casualties that has continued at very high levels for years, it emphasizes that more needs to be done.

Among its recommendations, the report urges Anti-Government Elements to cease the deliberate targeting of civilians and civilian objects, as well as the indiscriminate and disproportionate use of all IEDs. It calls on the Government of Afghanistan and international military forces to strengthen their review of incidents involving allegations of civilian casualties and ensure that effective reparations are provided for harm suffered. Beyond this, a halt in the fighting by all parties is the only effective way to protect civilians.

UNAMA conducts reporting pursuant to its mandate under UN Security Council Resolution 2405 (2018): “to monitor the situation of civilians, to coordinate efforts to ensure their protection, […] to promote accountability, and to assist in the full implementation of the fundamental freedoms and human rights provisions of the Afghan Constitution and international treaties to which Afghanistan is a State party, in particular those regarding the full enjoyment by women of their human rights.” Resolution 2405 (2018) recognizes the importance of on-going monitoring and reporting to the Security Council on the situation of civilians in the armed conflict, particularly on civilian casualties.

UNAMA undertakes a range of activities aimed at minimizing the impact of the armed conflict on civilians including: independent and impartial monitoring of incidents involving loss of life or injury to civilians; advocacy to strengthen protection of civilians affected by the armed conflict; and initiatives to promote compliance among all parties to the conflict with international humanitarian law and international human rights law and the Constitution and laws of Afghanistan, including in particular respect for rights to life and physical integrity.

Since 2009, UNAMA has been systematically documenting civilian casualties attributed to parties to the conflict in Afghanistan using a consistent methodology, which has allowed for year-on-year trend analysis and reporting. UNAMA’s protection of civilians’ work is grounded in principles of international human rights law and international humanitarian law, and its methodology is based on best practices and the advice and guidance of OHCHR.

UNAMA was established in 2002. It did not systematically document civilian casualties until 2009. Most commentators observe that the impact of the armed conflict on civilians in the period 2002 up to 2008 was not as severe as has been the case from 2009.

UNAMA only includes verified civilian casualties in its reporting. See report on methodology for details on UNAMA’s verification process and high standard of proof.

The 2018 UN Annual Report on Protection of Civilians in Armed Conflict is available at: 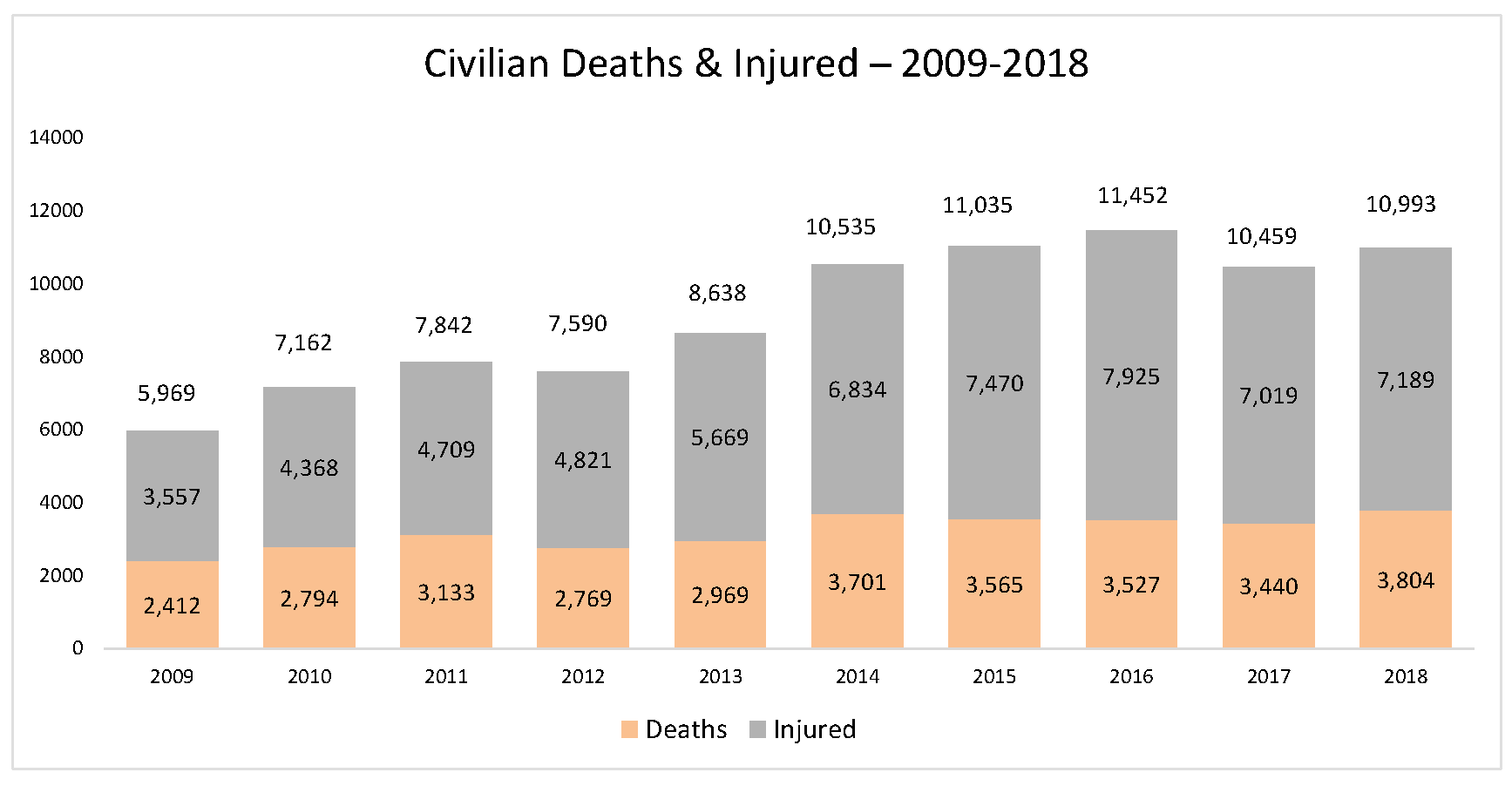 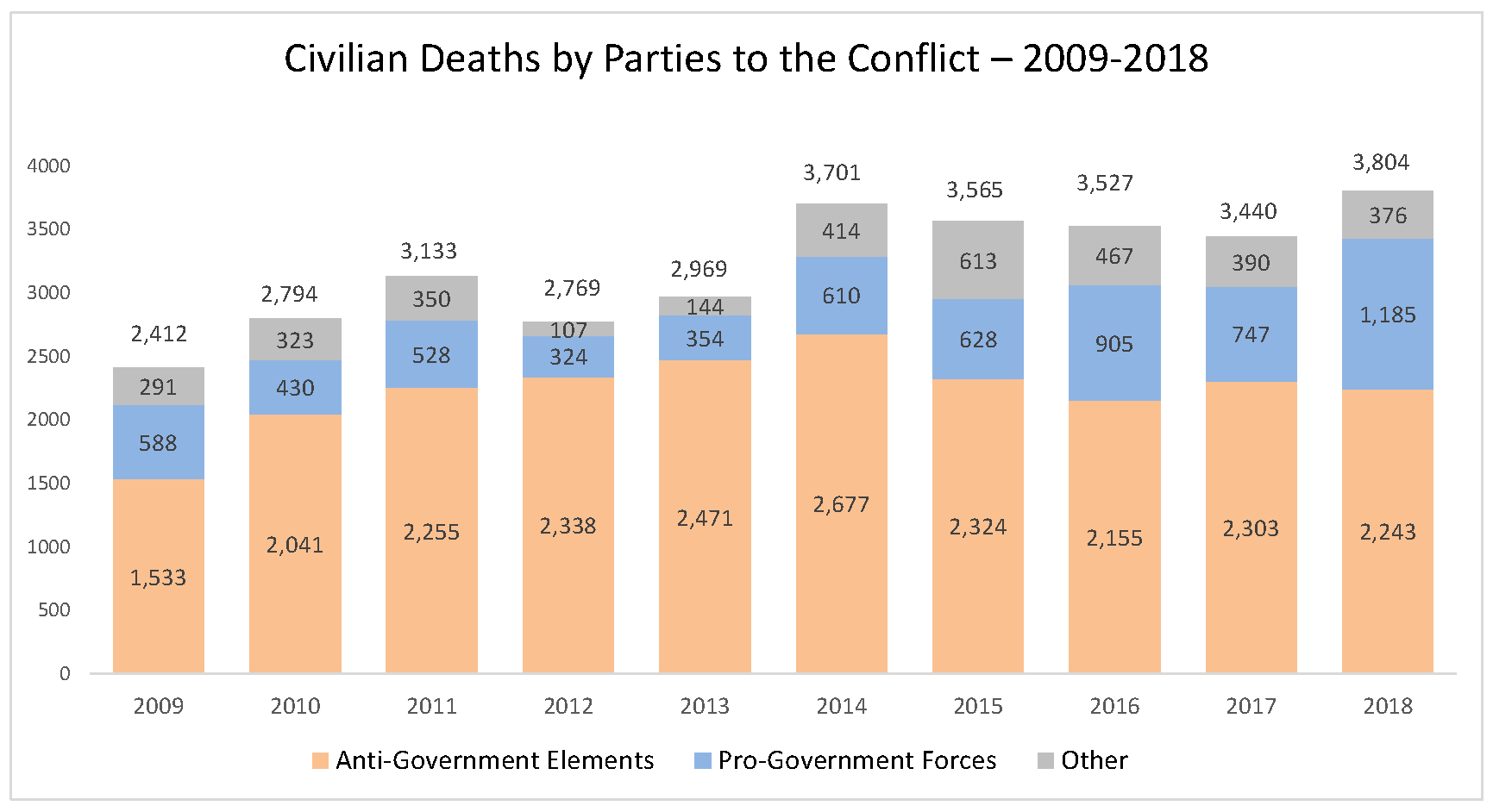 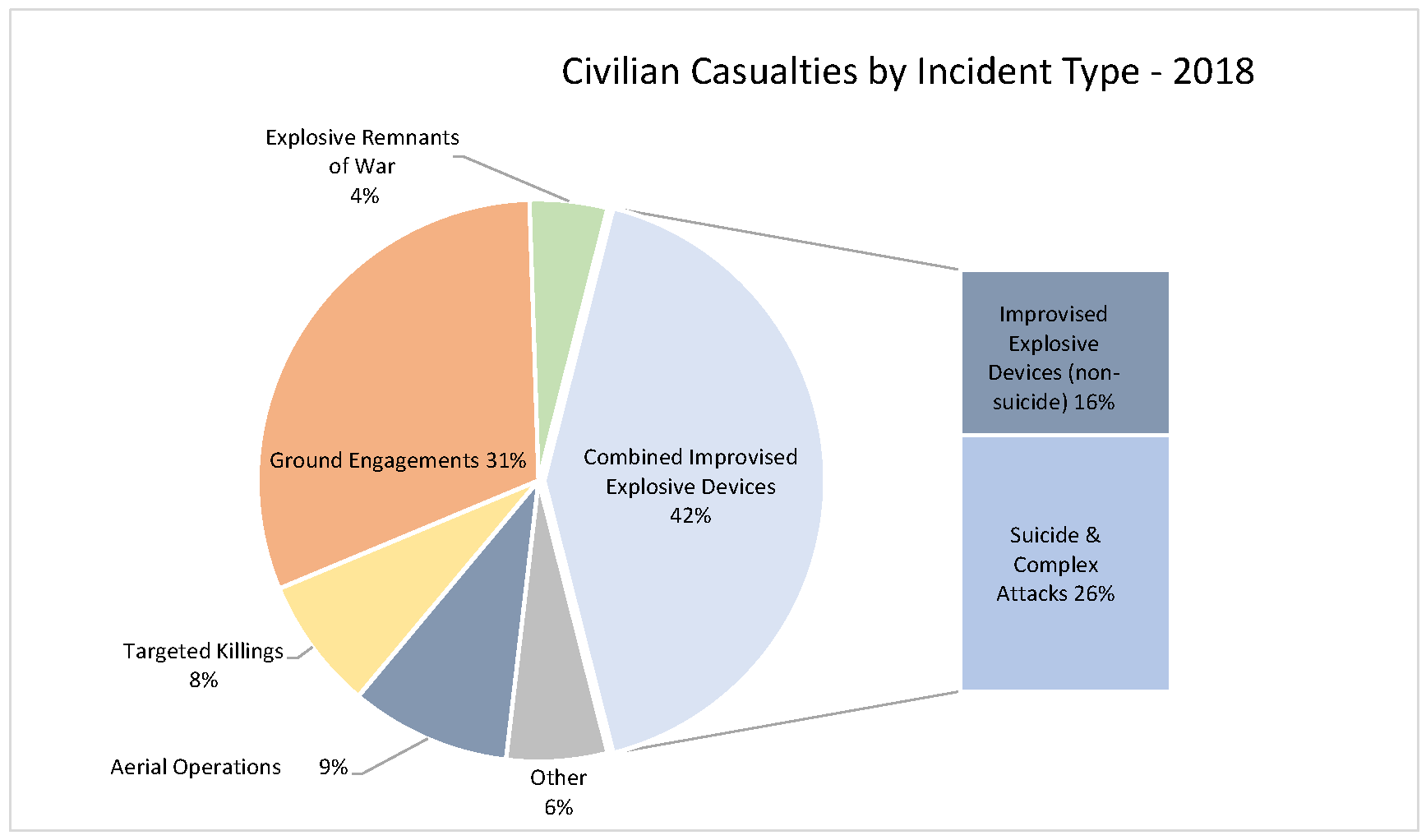 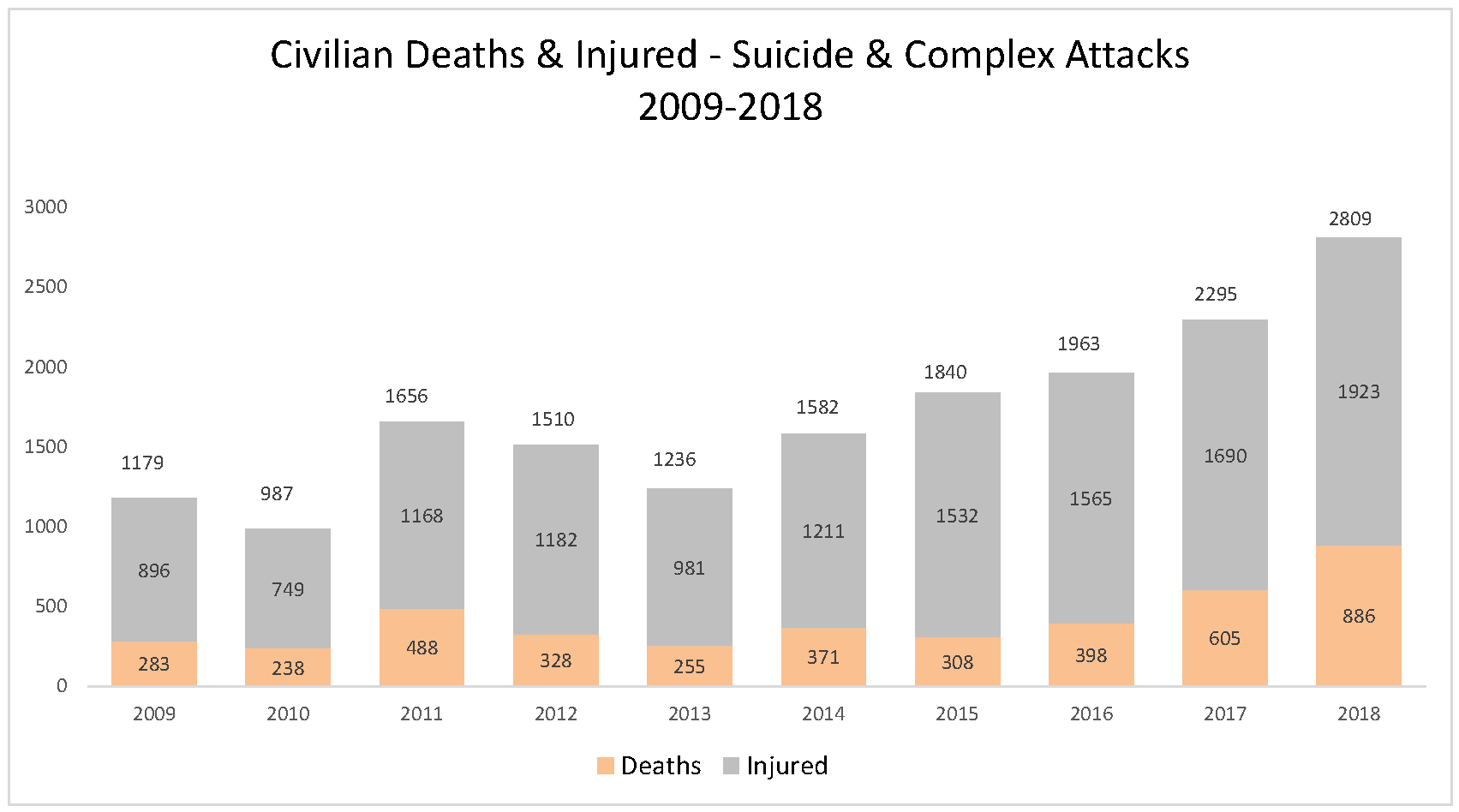 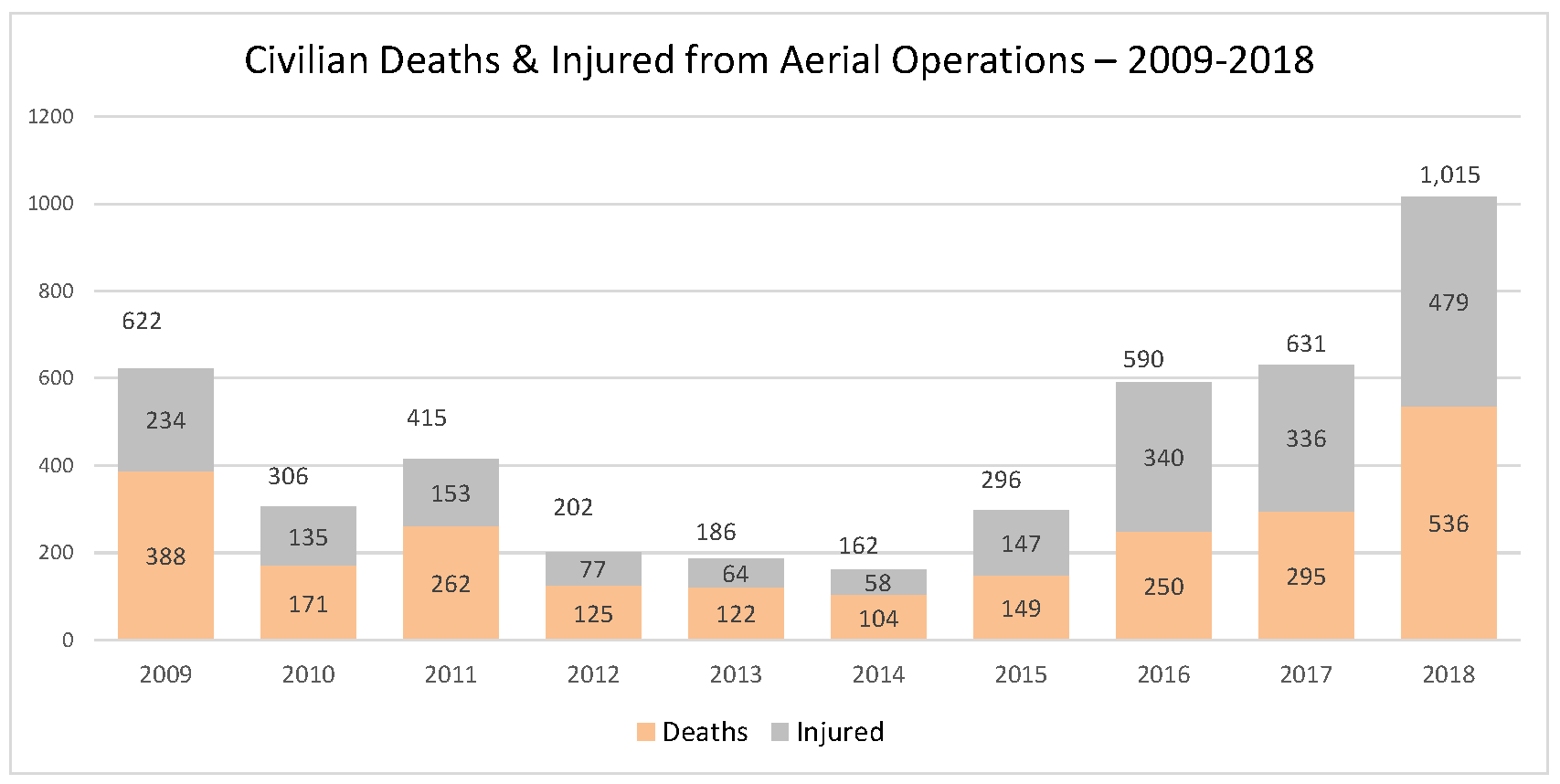 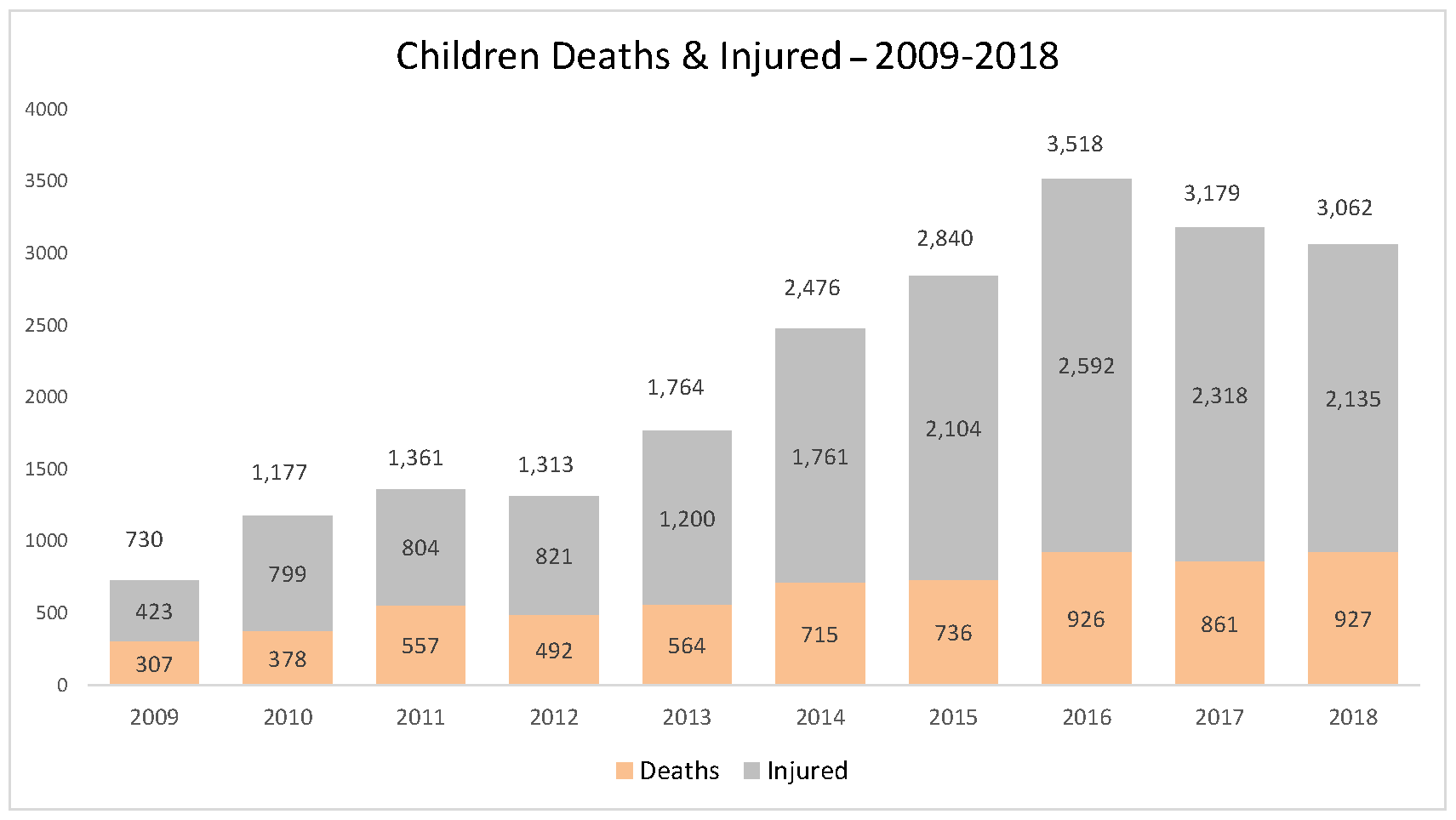