KABUL - The Afghan conflict continued to exact a heavy toll on Afghan civilians in the first six months of 2015, with civilian casualties projected to equal or exceed the record high numbers documented in 2014, the United Nations Assistance Mission in Afghanistan (UNAMA) said today.

Released today, UNAMA’s 2015 Midyear Report on Protection of Civilians in Armed Conflict documented 4,921 civilian casualties (1,592 deaths and 3,329 injured) in the first half of 2015, a one per cent increase in total civilian casualties compared to the same period in 2014.

The vast majority – or 90 per cent – of civilian casualties resulted from ground engagements, improvised explosive devices, complex and suicide attacks and targeted killings, according to the report, prepared in coordination with the Office of the United Nations High Commissioner for Human Rights.

“Afghan civilians have suffered far too long from this destructive conflict. The devastating consequences of this violence against civilians as documented in this report should serve to strengthen the broad conviction that peace is urgently needed,” said Nicholas Haysom, head of UNAMA.

“Until peace is achieved, all parties to the conflict must fulfil their obligations under international humanitarian law to minimize the impact of the conflict on civilians and match their public statements on the protection of civilians with concrete actions,” said Haysom, who is also the UN Secretary-General's Special Representative for Afghanistan.

Fighting between the parties to the conflict that could not be attributed to one specific party caused 10 per cent of civilian casualties while unattributed explosive remnants of war caused the remaining four per cent.

“This report lays bare the heart-rending, prolonged suffering of civilians in Afghanistan, who continue to bear the brunt of the armed conflict and live in insecurity and uncertainty over whether a trip to a bank, a tailoring class, to a court room or a wedding party, may be their last,” said UN High Commissioner for Human Rights Zeid Ra’ad Al Hussein.

“Impunity for serious violations of international human rights and humanitarian law has been reigning for too long in Afghanistan, and fuelling the cycle of violence. There need to be urgent, concrete steps towards accountability, to break this venomous cycle.”

“The rise in the numbers of women and children killed and maimed from conflict-related violence is particularly disturbing,” said Danielle Bell, UNAMA Director of Human Rights. “This year, UNAMA recorded the highest number of children and women casualties compared to the same period in previous years. All parties to the conflict must undertake stronger measures to protect civilians from harm. When the conflict kills or maims a mother, child, sister or brother, the repercussions for families and communities are devastating and long-lasting.”

The report outlines key steps to be taken by parties to the conflict to mitigate casualties and protect civilians from harm, including the following:

Cease the deliberate targeting of civilians and civilian locations, including places of worship and culture, civilian Government offices and aid workers.

Cease firing mortars, rockets and grenades from and into civilian-populated areas.

Cease the use of IEDs, particularly suicide and complex attacks, in all areas frequented by civilians, and stop using illegal pressure-plate IEDs.

Develop and approve a national policy on civilian casualty mitigation backed by an action plan with concrete objectives to prevent civilian casualties in the conduct of hostilities.

Disband and disarm all armed groups and militia, and ensure accountability for those members of armed groups who carry out human rights abuses.

Support the Government of Afghanistan in the development of a national policy on civilian casualty mitigation and support the implementation of an action plan to prevent civilian casualties in the conduct of hostilities.

Continue to take steps to ensure that all international military or foreign intelligence and security forces operating in Afghanistan, either independently or in support to Afghan national security forces, take all necessary measures to protect civilians during ground and aerial operations. 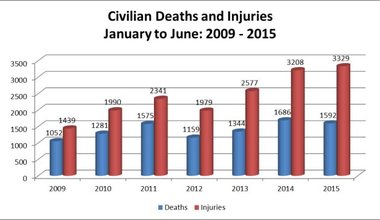 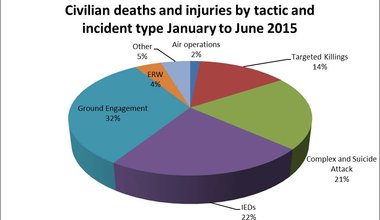 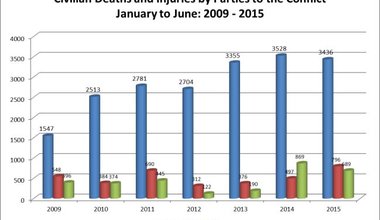