From Bamyan cave to Kabul mountain

From Bamyan cave to Kabul mountain

23 April 2009 - Dost Mohammad Khan left from Bamyan seven years ago. Since then he has been living with his family of nine on Koh-e Shir Darwaza [lion gate mountain]. He finds life in Kabul harsher than Bamyan.

“I did not know [this] when we first came to Kabul – life has become even more difficult for us here,” said Khan.

Khan was forced to leave the cave he called home in Bamyan for over 40 years. Khan’s house is now on one of the highest peaks in Kabul – Koh-e Shir Darwaza – higher than Koh-e Asmai or TV mountain opposite.

The 30 minute hike up the mountain makes it very difficult for Khan’s family to cope with daily life. But they have spent almost five years living here.

The mud-brick and stone houses on the peak of the mountain clearly demonstrated the harsher side of life in Kabul. Khan’s grand-daughter, Sanam Bebi, aged 4, has never been to the bottom of the mountain.

All of the houses built on the mountain slopes of Kabul are illegal but people buy and sell these houses which are the cheapest in the capital. “I bought this house for 180,000 Afghanis [$US 3,600],” Khan said.

It costs more than $USD 60,000 – twenty times what Khan paid for his house for a two bedroom flat in Microyon district of Kabul – only three miles away from Khan’s house. To rent a similar flat would cost around $US 300 a month. 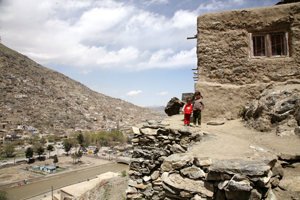 Khan’s son, Hassan, 22 is a daily labourer and the only breadwinner of the family. Access to clean drinking water and schooling for his grandchildren are Khan’s two main worries. He is too old to take his grandson, Sadad, who is eight to school. Sadad’s only access to education is the mosque at the bottom of the mountain. Sadad’s father gives him a piggy-back to the mosque early in the morning and takes him back home after he finishes his lessons at six o’clock.

There is a water supply pipe at the bottom of the mountain where hundreds of yellow water buckets and containers are lined up. Khan’s son wakes up at 3:00 am every day to fill the house tankers with water before he departs for work at 7:30 am.

Khan used to live in the caves of the giant Buddha in Bamyan. “I cried for days when the Taliban blew the Buddhas into pieces,” he said. However, despite all the problems Khan faces every day he loves the view he has over Kabul.