KABUL - More than 10,000 civilians lost their lives or suffered injuries during 2017, according to the latest annual UN report documenting the impact of the armed conflict on civilians in Afghanistan.

A total of 10,453 civilian casualties - 3,438 people killed and 7,015 injured - were documented in the 2017 Annual Report released today by the UN Assistance Mission in Afghanistan (UNAMA) and the UN Human Rights Office. Although this figure represents a decrease of nine per cent compared with 2016, the report highlights the high number of casualties caused by suicide bombings and other attacks using improvised explosive devices (IEDs).

“The chilling statistics in this report provide credible data about the war’s impact, but the figures alone cannot capture the appalling human suffering inflicted on ordinary people, especially women and children,” said Tadamichi Yamamoto, the Secretary-General’s Special Representative for Afghanistan.

Yamamoto, who also heads UNAMA, expressed deep concern at the increased harm to civilians caused by suicide attacks. “I am particularly appalled by the continued indiscriminate and unlawful use of IEDs such as suicide bombs and pressure-plate devices in civilian populated areas. This is shameful,” he said.

The second leading cause of civilian casualties in 2017 was ground engagements between anti-government elements and pro-government forces, although there was a decrease of 19 per cent from the record levels seen in 2016.

Women and children remained heavily affected by conflict-related violence. UNAMA documented that, in 2017, 359 women were killed - a rise of five per cent - and 865 injured. Child casualties - 861 killed and 2,318 injured - decreased by 10 per cent compared with 2016.

Attacks where anti-government elements deliberately targeted civilians accounted for 27 per cent of the total civilian casualties recorded in Afghanistan in 2017 - mainly from suicide and complex attacks directed at civilians or civilian objects.

The deadliest single incident documented since UNAMA began recording civilian casualties in 2009 occurred in Kabul on 31 May when a suicide attacker detonated a truck laden with approximately 2,000 kilos of military grade explosives during the morning rush hours in a densely populated area. This massive blast killed 92 civilians and injured 491.

“Afghan civilians have been killed going about their daily lives - traveling on a bus, praying in a mosque, simply walking past a building that was targeted. The people of Afghanistan, year after year, continue to live in insecurity and fear, while those responsible for ending lives and blighting lives escape punishment,” said UN High Commissioner for Human Rights Zeid Ra’ad Al Hussein.

“Such attacks are prohibited under international humanitarian law and are likely, in most cases, to constitute war crimes. The perpetrators must be identified and held accountable,” he said.

The report attributes 1,000 civilian casualties (399 deaths and 601 injured) and the abduction of 119 civilians to Daesh / ISIL-KP. “The group mainly targeted civilians in 2017 but also conducted indiscriminate and disproportionate attacks against security forces in civilian areas,” the report states. UNAMA recorded 160 deaths and 252 injuries to civilians during six attacks targeting places of worship, religious leaders, and worshippers claimed by Daesh / ISIL-KP in 2017.

The report observes that the number of airstrikes conducted by international military forces and Afghan air forces increased significantly. UNAMA documented 631 civilian casualties (295 deaths and 336 injured) from aerial operations conducted by pro-government forces, a seven per cent increase from 2016, and the highest number from airstrikes in a single year since 2009. Aerial operations accounted for six per cent of all civilian casualties in Afghanistan in 2017.

The report commends actions taken by the Government of Afghanistan and Pro-Government security forces in 2017 to protect communities from harm, highlighting the 23 per cent reduction in civilian casualties attributed to pro-government forces.

Other protection measures adopted by the Government included a national policy to prevent civilian casualties and ratification of the 1980 Convention on Certain Conventional Weapon instruments, which under Protocol V directs clearance of explosive remnants of war.

The report stresses the importance of implementing Protocol V, noting that in 2017, UNAMA documented 164 deaths and 475 injured as a result of explosive remnants of war. Eighty-one per cent of the victims were children and many of those who survived lost limbs or eyes, and suffered other serious injuries and psychological trauma, limiting their prospects for a normal life.

Among its recommendations, the report urges parties to the conflict to take all feasible precautions to protect civilians and civilian installations.  It calls on anti-government elements to cease the deliberate targeting of civilians and civilian objects and the indiscriminate and disproportionate use of all IEDs.

The 2017Annual Report on Protection of Civilians in Armed Conflict is available at: https://unama.unmissions.org/protection-of-civilians-reports 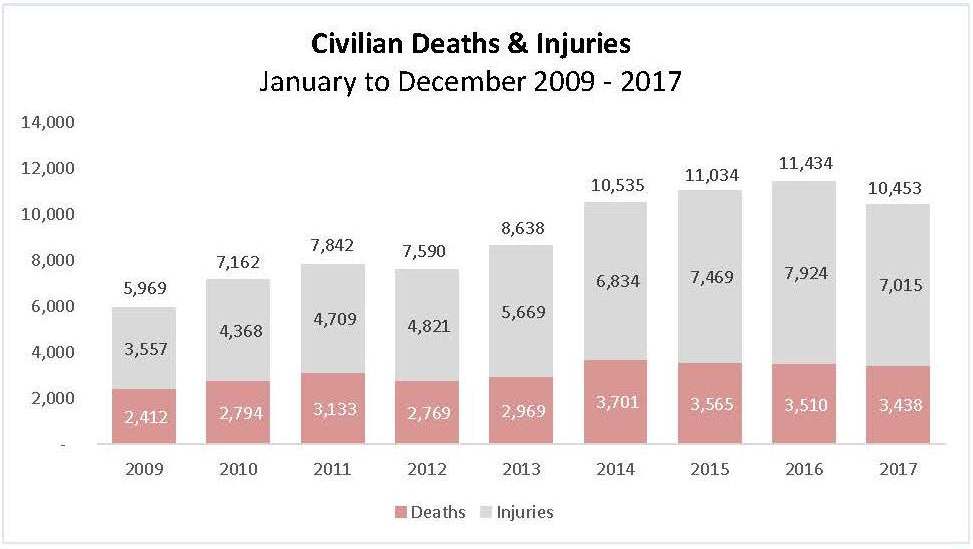 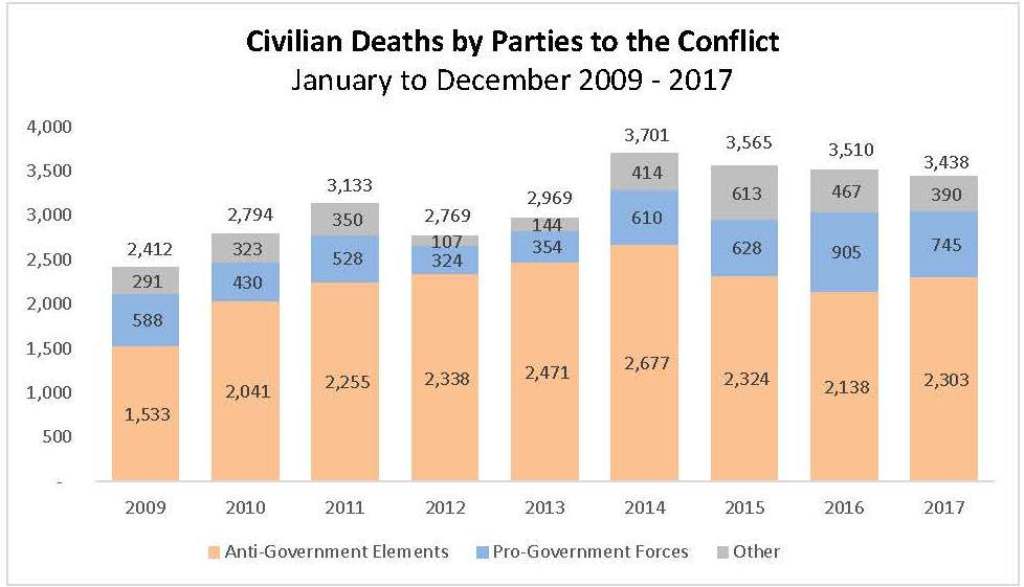 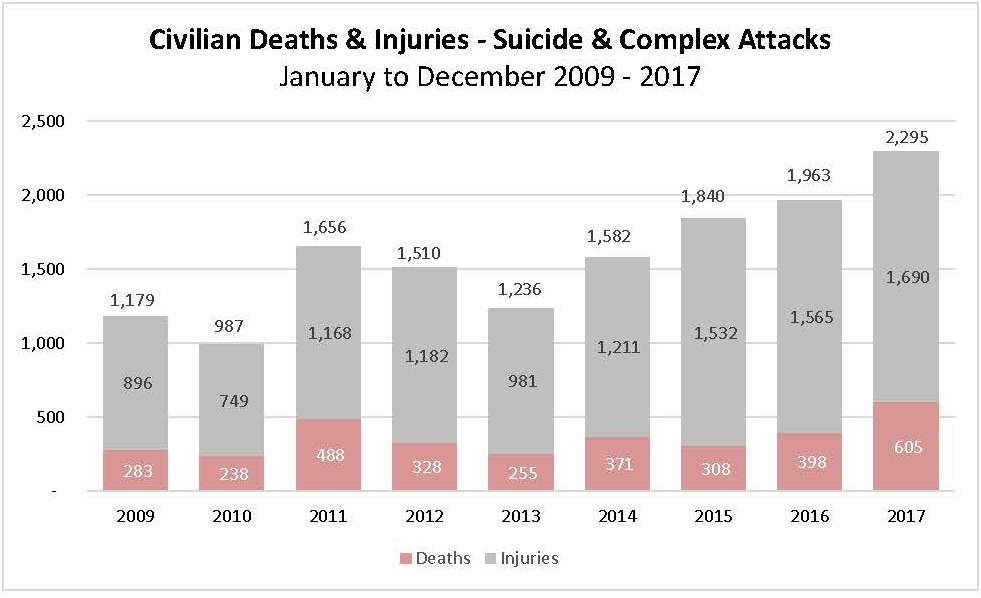 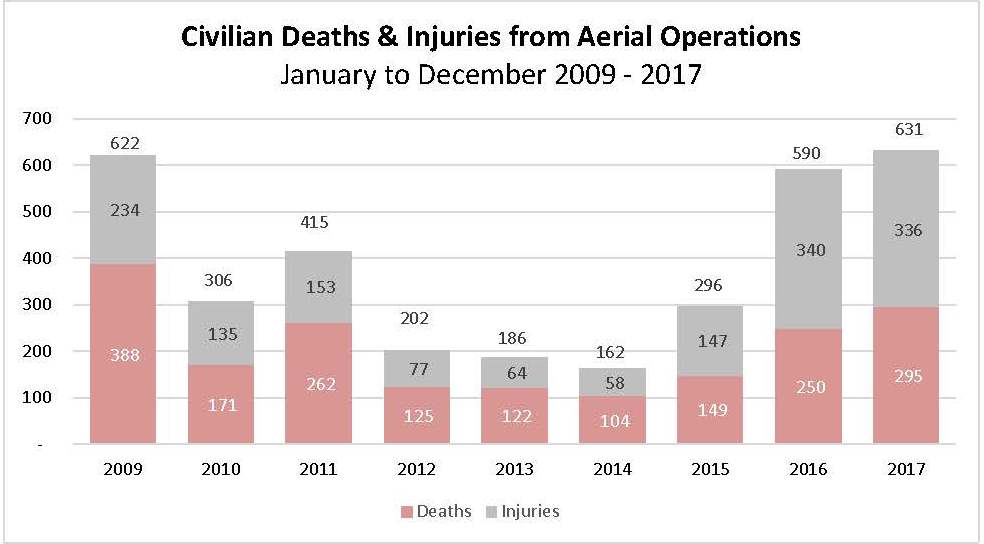 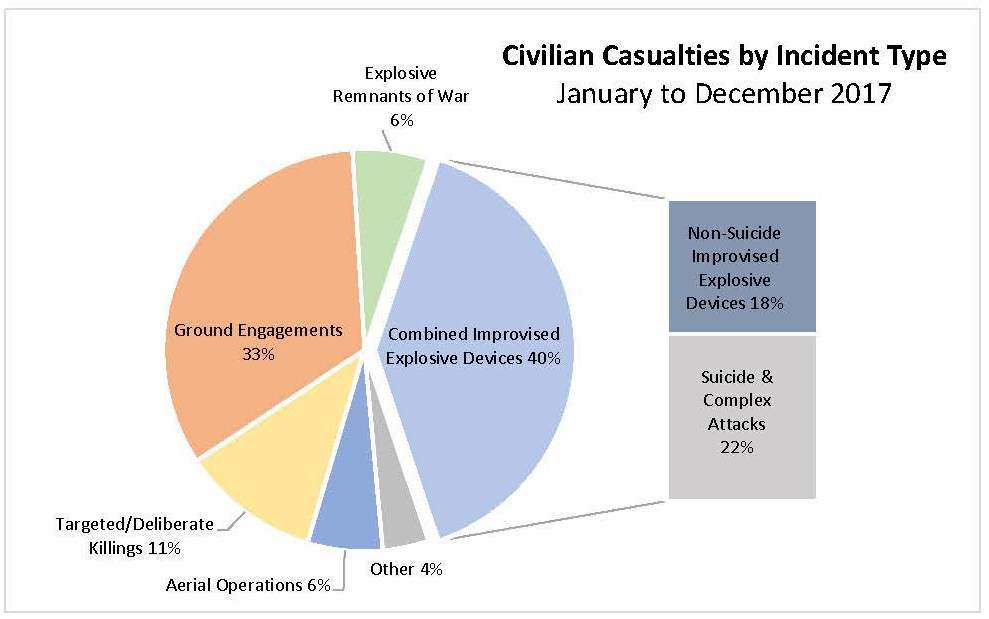